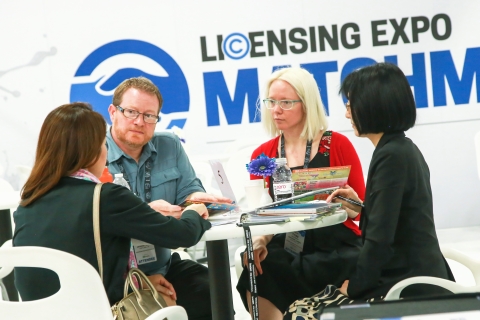 Licensing professionals have come to expect a plethora of cutting-edge show features when they converge at the annual Licensing Expo in Las Vegas, including a bustling expo floor, keynotes, presentations, celebrity appearances, educational sessions and invite-only entertainment showcases.

But for the second year in a row, the world’s largest licensing event offered something even more compelling to help attendees and exhibitors make more meaningful, face-to-face business connections: matchmaking technology.

Conducted at its most recent event, held May 23-25 at the Mandalay Bay Convention Center, the Matchmaking Service at Licensing Expo was made available to more than 16,000 attendees and 406 exhibitors, with overwhelmingly positive results.

“At UBM, face-to-face interactions are paramount, especially in an increasingly digital world,” said Jessica Blue, senior vice president of licensing for UBM, which owns and produces the show.

She continued, “To drive these face-to-face interactions, we began offering the Matchmaking Service at Licensing Expo. Due to the fragmented nature of our industry, making new, meaningful contacts is a challenge and we saw an opportunity to facilitate these connections between our exhibitors and attendees, helping them identify the right persons or organizations to connect with.”

Run on a custom-built online software application that allows users to search, connect and schedule face-to-face meetings prior to the show, the convenient, easy-to-use service is designed to help attendees and exhibitors ensure a more productive meeting schedule, help them make new business contacts and reach people that may have been previously difficult to locate.

Prior to the show, attendees and exhibitors were provided with individual web profiles and a personalized web dashboard that they used to complete their profile, search for contacts, schedule meetings and download their schedule. They could also set up personal meeting reminders via email or SMS.

Onsite, the show provided an exclusive Matchmaking Lounge with concierge service for any meetings scheduled using the service, which provided exhibitors and attendees with a convenient place to meet.

Since its inception in 2016, engagement and meetings booked with the Matchmaking Service have grown year-over-year, with more than 3,800 meetings scheduled before the 2017 show began, an increase of more than 1,200 meetings compared to the year before, according to Blue.

“The Matchmaking Service was helpful in making our attendance this year a success,” said Victoria Chang, licensing coordinator for Hang Ten North America.

She added, “We had 65 meetings confirmed via matchmaking before the team flew out. A few other invitations came in at the final hour. We of course had a few walk-ins but the heavy lifting was done by the service. I’m confident we are close to finalizing a few licensing deals.”

For Andrew Scott Brooks, CEO of DesignSkinz.com, the Matchmaking Service was the best feature of Licensing Expo.

“It was like having a well-connected friend introduce you to all their most important contacts,” Brooks said.

He continued, “I was able to pre-arrange meetings with several of the most important exhibitors at the Expo. Instead of a cold-call meeting, both sides already knew they were interested in what the other had to offer. Our company had an amazing experience at the Expo, making many connections with major IPs that will help our business grow exponentially. Nearly every major meeting was arranged through the Matchmaking Service.”

Licensing Expo and its Matchmaking Service will return to the Mandalay Bay Convention Center May 22-24.

Licensing International Expo Unveils Matchmaking, Sports-themed Attendee Engagement in Las Vegas
Wonder Woman, with its feature film coming out next year, led the parade of characters and other licensable properties at the 36th annual Licensing International Expo that…
Music China Gears Up to Help Music Businesses Prosper
Organized by CMIA, Shanghai INTEX, and Messe Frankfurt, Music China, as one of the most reputable musical instruments fairs in the world, will be held on Oct. 10-13 in…
Smart City Networks Helps Convention Centers Meet Client Demand for Wireless Connectivity
Once viewed as a luxury, high-speed wireless connectivity without restrictions is now an expectation of business professionals, particularly at hotels, conference and…
Penton Acquires Connected Car Portfolio of Events from FC Business Intelligence
Penton adds to its ground transportation portfolio with the acquisition of TU-Automotive from FC Business Intelligence for an undisclosed sum. The buy includes 13 global…
Cox Business Will Enhance Connectivity at Wynn Las Vegas’ Expansion
The forthcoming expansion of the Wynn Las Vegas convention center, set to be complete in February 2020, is getting more high tech. Cox Business announced this week that it…
Connect Is Getting Back to Business with Virtual Appointments, Strict Safety Protocols
Connect, the Atlanta-based producer of live events for meeting planners and the travel and tourism industry, has stepped out as a leader in creating contingency plans to meet…