Getting Non-Attendees to Your Trade Show Booth 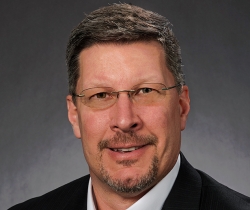 Bill DeMars is the Vice President of Business Development at NPPGov. He is also a Principal in the consultancy firm of Ashmak, LLC, which specializes in executive-level guidance from entrepreneurial to established medical technology companies. Connect with him on LinkedIn and Twitter.

Being at the correct trade show is one of the most opportunity-rich environments a company can participate in to secure face-to-face time with potential customers. In addition, trade shows provide the platform to highlight new products, special services and enhanced branding. Your team is also on-point to conduct demonstrations and proclaim the benefits of your company.

At a trade show, the number of attendances can range from a few hundred to many thousand. But what if you could provide your message from the trade show to millions of people, all of which are not at the exhibition? In addition, imagine that you could reach these non-attendees in real-time without adding any expense to the trade show you are already attending? Is this possible?

With nothing more than a cellphone, a social media account, a willing presenter and a WiFi/Cellular Internet connection, you can tell your story to the world. The following is a real-world example.

In July of 2017, a national cooperative public procurement company, NPPGov embarked on a way to show case their vendors and their vendors’ new products to NPPGov’s tens of thousands of members who could not attend the Fire Rescue International (FRI) trade show in Charlotte, NC. Yes, bringing their members to the tradeshow floor without leaving their fire district! 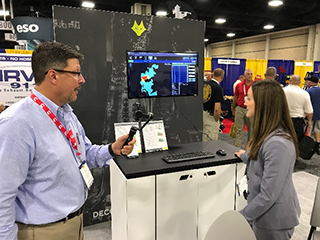 Preparation: In advance of the trade show, the NPPGov trade show team prepared a plan to identify those vendors who will be exhibiting at the trade show and who would have new and exciting products that their members would enjoy seeing. A list of eight vendors was selected and time was made available during trade show hours to live-stream product demonstrations for those eight vendors. You heard me correct, live-stream their vendors message in real-time to their members who were not at the show.

Each vendor selected their best representative to highlight the newest product they were exhibiting. Times were established with each vendor to conduct the interview and live-stream the video. Below is a picture of NPPGov’s vendor Deccan International (providers of EMS & Fire Service planning) being live-streamed on Facebook via NPPGov’s account.

Equipment: The live-streaming was accomplished via an iPhone 7 Plus and a gyroscopic gimble ($110). The social media venue was Facebook and its Facebook Live feature. For a data connection to Facebook, we used the cellular data services through the iPhone.

After each live-stream, the video was shared on each vendor’s own social media platforms (Facebook, Twitter and LinkedIn). The videos were also boosted to other Facebook members who were not part of FRGPO’s original member list, based on demographics and areas of interest.

Metrics: When conducting marketing efforts, if you cannot measure the results, is it worth doing it? Because this was the first time we conducted live-streaming, we were not sure how the streaming would be received. One of the advantages of using social media is that analytics are available in real-time. During and after our first streaming session, we could watch our followers joining the stream. They would click “like” during the video when they liked something and they were also posting questions. The interaction was something we did not expect! To better understand the analytics available during and after the streaming we have provided a few screen shots as examples. 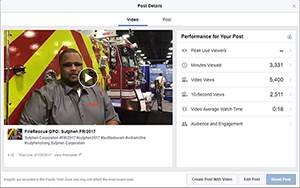 For this video, Sutphen Corporation, which builds fire apparatus, had 5,400 views for a total of 3,331 minutes. How many sales calls would an individual salesperson need to make to achieve that number of minutes in front of customers? 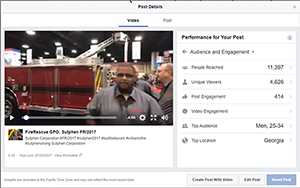 From a continued review of the analytics, there were 4,626 unique viewers with 414 post engagements. 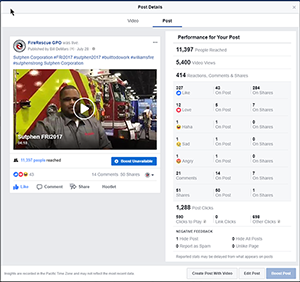 The above analytics show the engagement our viewers had with the video.

Summary: For a minimal investment in planning and execution, you can enhance your trade show experience and ROI. In addition to the benefits of pushing their vendors’ message to their members via social media, there was also an increased sense of partnership between NPPGov and their partners.