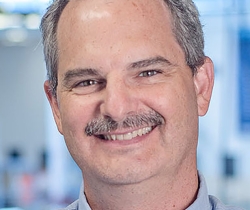 Pierre Menard is the Director of Research, Development and Innovation at Skyline Exhibits. He has been with Skyline since 2012. Pierre began his career as a welder, machinist and shop manager and progressed to leading engineering teams and developing proven processes to bring new and innovative products to market.

In Part 1 of this article, we broke down the features, benefits and strategies to mitigate risk for selecting tablets, kiosks and TV screens. In Part 2, we will cover computer monitors, projectors and video walls built from LED tiles.

Computer monitors are quite often much smaller than TV screens and come in a smaller range of sizes. Many TVs come in sizes in excess of 50 inches, while computer monitors often top out at only 30 inches. Typically, computer monitors have more pixels per inch than TV screens because they are designed for up close, long-term viewing. Choose computer monitors over TV monitors for longer interactions, where the attendee will be reading text, typing answers or playing a game. Be sure to adjust the brightness of the screen to the ambient light conditions as well to avoid fatiguing attendee’s eyes.

Two final considerations when implementing projector technology is aspect ratio and sound. Many projectors have a native aspect ratio of 4:3 like an old TV or laptop computer. In this type of projector, 16:9 content is emulated by dynamically resizing the content at a lower brightness and lower image quality. Regarding sound, it can be disconcerting if your audio sources are separate from the screen. Be sure to place the speakers near the screen and test before going live to make sure it feels like the sound is coming from the screen.

A video wall is made up of multiple displays placed together, creating one giant image. Each individual screen shows a portion of the image, sometimes referred to as a “zone.” The displays used in video walls are commercial displays, because they must have a very thin bezel around the screen to stack them close together, and they must be capable of displaying “zones”— not generally possible with consumer-grade TVs (a simple 2x2 array can be displayed on consumer grade TVs if a connected to a PC with a higher-end graphics card). The modularity of video walls enables digital images much, much larger than even the largest single-screen monitors.