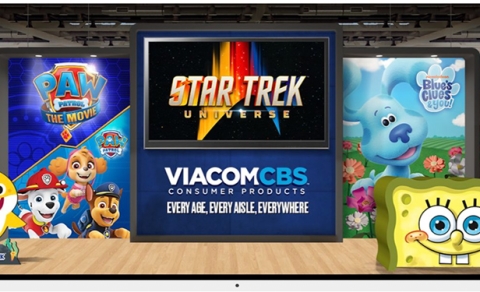 It’s not often you can put Trivial Pursuit, an MTV-styled workout and Spongebob Squarepants-themed yoga into one event, let alone of one sentence. Yet that sort of creativity is why Informa Markets is hailing the success of its month-long virtual Festival of Licensing in October.

Traditionally held over three days at Mandalay Bay Convention Center in Las Vegas, the 2020 Licensing Expo was entirely reimagined due to the pandemic. Rather than cram Zoom connections with attendees all across the world into a few days, Informa dramatically altered the scale and shape of the show.

The sheer size of the licensing industry—any brand you’ve heard of is involved—makes the event daunting during regular circumstances. The goal is to connect manufacturing companies including Hasbro, ViacomCBS and Bandai Namco and more with representatives from the likes of Nike, Target, Walmart, McDonalds and Lego. Deals made at this event lead to how retail stores and restaurants are stocked.

More than 200 household names manned virtual expo booths to continue the communication necessary to maintain the business exchanges that translate to everyday purchase for consumers.

Running Oct. 6-29, the Festival of Licensing was split into three international scopes—The Americas, Europe and Asia—that were spotlighted each week. This allowed staff to make the event as accessible to attendees regardless of time zone or other potential constraints of remote participation.

“Our experience at Festival of Licensing was invaluable—the deals signed, connections made, and education offered far exceeded expectations,” said Carol Janet, CEO of Design Plus. “We are thrilled to be walking away with newfound relationships with qualified licensees that we would otherwise not have had the chance to speak with and look forward to exciting developments for our brands that are a direct result of exhibiting at Festival of Licensing.”

She suggests any group trying to pull off a similar feat sacrifice live programming for smoothness in order to ensure a successful, seamless event.

“I cannot recommend enough that you pre-record as much of the content as possible, this lessens the chance of technical hiccups,” Knight said. “You don’t want to interrupt the online attendee experience.”

After-hour activities and built-in breaks like the Spongebob and board game activations were added to alleviate the strain of attending a trade show on a computer. “We wanted to quell virtual attendee burnout,” Knight added.

The 2021 Licensing Expo is slated to return to Mandalay Bay in May 2021, but Knight predicts, and even encourages that some of the changes made in the year of COVID remain in place.

“We hope that these styles of events will be as inclusive as possible and enable participation for those unable to attend in 2021 and also those who perhaps have not thought about attending previously,” she said

PlanetIMEX Virtual Platform for Community, Education and Networking Launches This Month
While this year’s IMEX flagship Frankfurt event was canceled back in March, members of the IMEX community will still have opportunities to come together virtually over the…
The Right Time for a Rebrand
What’s in a brand? Well, a lot of things! More than just a logo, a brand encompasses your message and your reputation. It’s both tangible and intangible. It’s not meant to be…
Explori, Centerplate, CompuSystems and More Forge Business Deals
While some industries tend to slow down in the summer, apparently the trade show industry hasn’t gotten the memo. A host of event organizers, vendors and venues have been…
New Business Contracts: Slew of Deals Mark a Busy Summer
This summer hasn’t slowed down at all, with plenty of new business contracts taking place between suppliers and shows.CompuSystems continues to grow its client base by adding…
People News: February Marks Busy Month of Hiring, Promotions
February wasn’t just a month to celebrate Valentine’s Day and slog through the dog days of winter in some areas of the U.S., it also was a busy time for companies to hire new…
Snowsports Festivals Rebrand, Expand Offerings With New Online Platform
Snowsports Industries America is hoping that a dual-pronged approach to updating two long-standing expos will create an avalanche of excitement. In announcing its new…