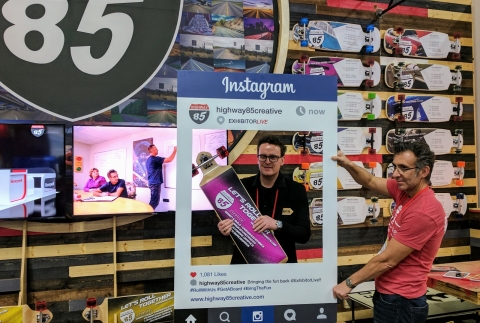 Among the show’s more than 200 exhibitors, the showfloor sparkled with ideas, including a wide range of innovative engagement experiences.

Czarnowski celebrated its 70th anniversary with a “Dinner Party” in an exhibit modeled after a mid-20th-century house, complete with a bike rack and a kid’s wagon.

“We wanted this to feel like a casual dinner with friends,” said Kaylee Goldhammer, Czarnowski content marketing manager.

Attendees started off with a glass of sparkling wine or berry water before moving to the dinner table set with plates representing different industries.

Move a plate for “healthcare,” and a RFID chip triggered the placemat to turn into a video screen showcasing projects in that field.

Looking into the future, attendees could see 3D-printed parts used for anchoring fabric elements and chat with Alexa about tradeshows, the term Czarnowski recently registered with Amazon.

Seamless technology played a big role in the exhibit of mg, formerly known as MG Design.

“We used to do complex engagements but this year we’re focusing on single-source simplicity,” explained Ben Olson, vice president of marketing for mg.

The technology behind the experience was complex.

As part of the pre-show campaign, VIP attendees received a code that they could enter into a touch screen when they got to mg’s booth, after which a LED screen would light up with their photo and a personalized greeting.

Attendees could also get a glimpse of digital solutions behind the exhibit, such as Scanalytics tiles that track traffic around an exhibit and provide actionable data for designing future experiences.

Ubiquitous tech made it easy to experience the creative journey at the Freeman exhibit, where attendees were invited to participate in every stage of the design process.

From a discovery session and sketch pads, then to 3D and finally to virtual reality, an exhibit or environment came alive right in front of their eyes.

“With virtual reality, clients can literally walk through their exhibit, determine what needs to be rearranged and make those adjustments before we ever start building,” said John Santangelo, director of design technology for FreemanXP.

The tool is now used for large builds as well as for product demos for items such as fighter jets.

A spa-like environment welcomed attendees at the GES exhibit.

“Relax. Refocus. We’ve got this” was the message at this tranquil space lined with birch trees and greenery.

Attendees enjoyed some chocolate treats and walked away with a care package complete with essential oils and tea.

He added, “With the help of our strategists, we will help booth visitors refocus on their program’s most pressing needs.”

First-time exhibitor Highway 85 Creative banked on a “let’s roll” concept, as its staffers floated around the showfloor on decked-out skateboards.

“We decided not to bring the sales staff and instead brought the creative team,” said Guy Zwick, Highway 85 Creative CCO.

He continued, “People ask them about the boards, and it’s an icebreaker.”

Attendees who gathered four business cards from the team could take home a longboard, a simple marketing idea that turned out to be very effective in driving traffic to the far corner of the exhibit hall.

A different take on the hands-on approach helped attendees reconnect with their inner child at the Impact XM exhibit where they could pick from a “buffet” of Lego pieces and create their own “mini-me.”

“We help customers drive traffic, so we wanted to visually demonstrate that,” said Impact XM CCO Steve Mapes, pointing to a conveyer belt of tiny characters as the key piece of the exhibit.

The company recently did a series of “bio-interactive” engagements that “connect the body with gamification.”

For example, cardiologists could participate in an on-screen race powered by their heart rates and neurologists could manipulate with EEG sensors.

When asked what’s changing in the engagement world, Mapes said, “What’s not changing is the importance of knowing your customers’ customers, putting yourself in the shoes of your attendees and knowing what’s on their minds.”

Attendee Engagement Reaches New Heights on EXHIBITORLive! 2016 Showfloor
Walking the aisles of the EXHIBITORLive! 2016 showfloor at the Mandalay Bay Convention Center in Las Vegas last week can best be described as awe-inspiring, enlightening and…
3 Ways to Excel at Experiential Marketing in 2017
What makes a modern marketing event memorable?  Is it when a brand trots out the same ole' tactics to deliver the same ole' message to the same ole' people? Or is it…
Event Marketers Identify Best Practices for Year-round Attendee Engagement
By Elizabeth Johnson With the rise of digital entertainment options and the fall of attention spans, now just eight seconds on average, engaging attendees beyond a trade show…
Creative Thinking and Digital Engagement Ruled the Day at EXHIBITORLive
From Warhol-themed terrariums to frequent flyer cocktails, the EXHIBITORLive 2018 conference and trade show inspired event and trade show marketing professionals to think…
Unofficial Overview of CEIR 2017 Attendee Floor Engagement Study
Learn how to better engage trade show attendees by reviewing this telling research from CEIR about tactics attendees engage with on the show floor. The 2017 Attendee Floor…
3 Experiential Marketing Techniques to Embrace In 2021
Before the pandemic, brands were investing in the consumer experience more than ever. Pop-up shops, interactive ads and more helped brands deepen their connections with…