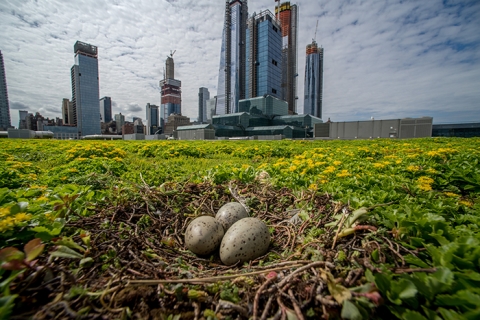 Two new wild bird species were recently identified at the Javits Center’s nearly seven-acre green roof, which has evolved into a unique wildlife sanctuary since its genesis in 2014. The new birds, discovered this spring by New York City Audubon Society, Killdeer and Ovenbird, now join 35 other local and migratory bird species, five bat species and thousands of insects, including 300,000 honeybees that regularly visit or inhabit the rooftop sanctuary on Manhattan’s West Side.

Led by the New York Convention Center Development Corporation (NYCCDC), the construction of the 6.75-acre green roof, the largest of its kind in New York State, was part of a major five-year renovation of the convention center that included adding 1.2 million square feet of event space, installing more than 6,000 bird-safe glass panels and more than 100 energy-efficient HVAC units.

Thanks to the venue’s sustainable upgrades, bird collisions have been reduced by more than 90 percent, and the rooftop has transformed into a flourishing habitat for area wildlife, according to Javits Center officials.

“Our green roof is living proof of the power of sustainability,” said Alan Steel, CEO of the New York Convention Center Operating Corporation, which operates the Javits Center. “Thanks to our ongoing partnership with NYC Audubon, we have been able to understand how simple, smart changes to our infrastructure can have a positive impact on the urban environment, and these new bird species certainly exemplify that impact.”

Comprised of sedum, a low-lying rock plant that has served as a suitable habitat for birds to nest and forage, the green roof and its environmental impact have been studied by members of NYC Audubon since 2014 via observation visits, sample collections and the banding of baby chicks with U.S. Geological Survey bands designed to track their movements throughout the country.

According to NYC Audubon officials, birds born on the green roof have traveled as far as away as Canada and Florida, and some have returned to the roof in subsequent years.

“The transformation of the Javits Center into a wildlife haven is an extraordinary achievement, and these new bird species demonstrate its transformation is far from over,” said Jessica Wilson, executive director of NYC Audubon. “The Javits Center serves as the finest example of how building managers can revamp their structures to provide high-quality habitat and safe passage for our migratory birds, which face threats of collisions from glass buildings and a lack of greenspace throughout our City.”

She added, “We are honored to work closely with their sustainability employees to study one of the most remarkable rooftops in the United States.”

Besides serving as a welcoming and safe environment for wild birds seeking sanctuary in the middle of an urban jungle, the green roof has also gone a long way in helping Javits achieve its ambitious sustainability goals.

Led by Architect Bruce Fowle, founder of FXCollaborative, and then-NYCCDC President Barbara Lampen, the 2009-2014 Javits Center roof renovation led to a 26 percent reduction in the venue’s energy consumption and paved the way for the recent 1.2 million-square-foot expansion, which was completed in May of 2021.

Part of the venue’s expansion project included the construction of a one-acre rooftop working farm, which is expected to generate up to 40,000 pounds of produce each year. Located more than eight stories above street level, the farm has joined the New York State Grown & Certified program, a statewide effort that identifies local producers who adhere to higher standards in terms of food safety and environmental stewardship. Farmers with Brooklyn Grange, which manages the farm’s day-to-day operations, plant a variety of crops and work closely with on-site chefs to integrate the fresh produce into special roof-to-table meals for specific events.

From West 34th to West 40th streets between 11th and 12th avenues, the expanded Javits Center also features a four-level truck marshaling facility capable of housing up to 200 tractor-trailers at any one time, reducing neighborhood congestion and pollution while improving traffic safety. The expansion has also been certified LEED Gold by the U.S. Green Building Council.

Check out the Javits Center’s green roof and its feathered inhabitants in real-time by visiting its live Green Roof Cam here.

Javits Center Opens Green Roof for Summer Tours
Imagine you’re at a large trade show in a giant convention center among throngs of people and you’re starting to feel tired and stressed. Instead of just grinning and…
As US Election Wraps Up, NAB Show New York Takes Over Javits Center
By Elizabeth Johnson If you watched the U.S. Presidential Election coverage on Tuesday night, you likely saw a crowd of people gathered under the Jacob K. Javits Convention…
New York’s Javits Convention Center Will Add 1.2 Million Square Feet
As part of his 2016 agenda, N.Y. Gov. Andrew Cuomo unveiled a $1 billion plan to dramatically increase not only the meeting and exhibit space at the Jacob K. Javits…
The Javits Center Launches New Online Ordering System for Convention Customers
The Javits Center has officially launched Jake, a new online portal designed to improve the customer experience by simplifying the ordering process of products and services…
Javits Center Surpasses 250,000 Vaccinations in Major Milestone
On March 24, New York’s Javits Center hit an important milestone for the health of its community. Since opening its doors on Jan. 13 as a mass COVID-19 vaccination site, the…
Javits Center Expands Its Juniors Scholarship Program
Javits Center has expanded and extended its Javits Juniors Scholarship Program, designed to support the higher education of local high school students while encouraging them…