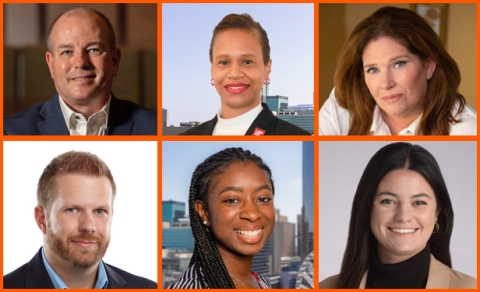 The flurry of new hires in the events industry continues unabated, particularly at destination marketing organizations and industry associations. Check out who’s landing new career opportunities or moving up the ladder:

Following a nationwide search, the Arlington CVB (ACVB) has tapped Brent DeRaad, current president and CEO of Visit Tucson, as its new president and CEO, effective Dec. 6. He is replacing Ron Price, who has served as the ACVB’s president and CEO since 2013. Price resigned in May to head up Visit Phoenix.

DeRaad brings more than 20 years of hospitality leadership, sales and marketing experience to his new role. Prior to Visit Tucson, he was executive vice president of the Scottsdale CVB, where he previously served as vice president of marketing. He has also worked as director of communications with the Greater Phoenix CVB.

The Association of Equipment Manufacturers (AEM) has named John Somers as its vice president, Construction and Utility Sector. He replaces Megan Tanel, who will succeed Dennis Slater as AEM president effective Jan. 1, 2022.

In his new role, Somers will be responsible for the strategic direction of construction and utility programs and services for AEM membership, serving as the primary liaison to AEM’s CE Sector Board and with CE-specific industry organizations, customer groups and government agencies throughout North America and worldwide.

Somers joined AEM in 2007 and has held various positions with increasing responsibility within the organization over the past 14 years.

Choose Chicago has promoted 25-year hospitality sales veteran Tamara Jones to senior director, conventions and trade show sales. In this role, she will be responsible for representing and selling Chicago’s convention citywide packages with a focus on large-scale medical, sports and other key association meetings at McCormick Place, as well as leading the for-profit trade show sales efforts in her diversified portfolio.

Prior to coming to Choose Chicago in 2015, Jones worked with Hilton Hotels, where her relationship-building and prospecting skills enabled her position as a multi-year top sales director.

Connors brings extensive global sales expertise in B2B events, media and event technology to her new role. She had a long career with Fastmarkets, a Euromoney PLC business unit, most recently serving as its global sales director, event sponsorship and advertising, where she was instrumental in developing and managing its global sales team across multiple commodities sectors. She has also held senior-level leadership positions at Cahners Publishing and Thomas Publishing.

Coleman will manage groups ranging from 250 hotel room nights on peak to major citywide accounts. Bringing more than two decades of hospitality experience to her new role, she is returning to ACVB after beginning her career with the organization in 2000. Starting as administrative assistant to convention services, she was promoted to convention services representative and then manager before departing in 2015 to join ATL Airport District as director of convention services. She then relocated to New York City to become senior event manager with New York Marriott at the Brooklyn Bridge before returning to Atlanta.

Zackery will produce and publish content for ACVB channels and collateral, focusing on group markets, social media and publications. She will also manage content initiatives across all platforms to drive engagement, primarily for groups and attendees. She joined ACVB in 2017 as specialist, group markets to develop creative concepts, including ATL Unguided. She previously worked as an event coordinator for Georgia State University and as marketing and communications director for Chick-fil-A Riverdale Dwarf House.

IAAPA, the global association for the attractions industry, has appointed Kelly Repass as director of global research. Based in Orlando, Fla., she will be responsible for leading the association’s worldwide market research and data analysis initiatives, primarily focusing on econometric and operational research.

Repass brings more than 20 years of research experience in the tourism industry, most recently serving as consumer insights manager for Disney Parks, Experiences and Products. Prior to that, she worked for Celebrity Cruises as manager of market research and consumer insights, and held research-focused positions with SeaWorld Parks and Entertainment and Visit Orlando.

John Ryan has been hired as the PHLCVB’s social media specialist, responsible for planning, creating and managing strategic content for the organization’s 12 domestic and 14 international social media platforms. Most recently, Ryan managed social media and developed digital communications for Philly311, the City of Philadelphia’s customer service center for non-emergency inquiries.

Chelsea Ann Rovnan has joined the PHLCVB team as content coordinator, supporting the organization’s creation of communications material for print and digital platforms. Prior to joining the CVB, Rovnan spent five years as a news writer for CBS-3 Eyewitness News, worked as copy editor for WHIP Radio and has bylines with The Temple News.

Melissa McClure has been appointed global tourism sales manager, responsible for supporting the CVB’s efforts to increase overseas visitation to Philadelphia by creating and executing sales and marketing strategies in key European markets. She previously served as sales manager for domestic and international leisure travel for Visit Fairfax in Fairfax, Va.

Robin Bloom has been promoted to director of content, leading the strategy, creation and management of all PHLCVB content streams, including web, social media and print, and overseeing international communications. Before joining the CVB in 2017, she served as producer and on-air host for WHYY for more than 20 years.