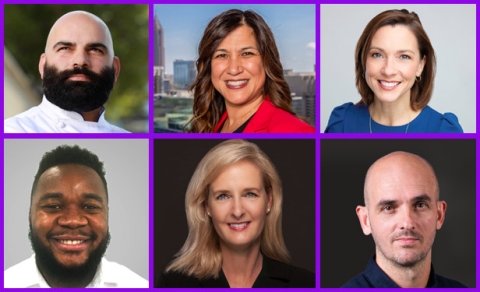 Mirroring the red-hot U.S. job market, the trade show and events industry is continuing to experience an influx of new hires and promotions as it works to get back to normal. Check out who’s moving up the ladder at a host of organizations across the events spectrum:

She most recently served as senior vice president and general manager for the ASI Show, has held leadership positions at Reed Exhibitions and Informa, is a founding member of the North American chapter of Women in Exhibitions and has served on the Board of SISO.

International media company Diversified Communications has promoted Whit Mitchell to CFO. Mitchell joined Diversified in 2013 and has served as corporate vice president of finance since 2018.

Pamela Mastrota has joined The Toy Foundation as executive director. Most recently, Mastrota served as COO for Make-A-Wish Metro New York Western New York, and prior to that, as president and CEO for the National Multiple Sclerosis Society Long Island Chapter.

International Market Centers (IMC) has announced a series of promotions in its event sales and operations division.

Bob Schuler was promoted to senior vice president, event sales and operations, a role that adds trade show operations in High Point and Las Vegas to his existing responsibilities of overseeing and accelerating business for the Atlanta Convention Center at AmericasMart.

Jennifer Muna was promoted to vice president, event sales and operations. In addition to sales and operation of The Expo at World Market Center Las Vegas, she is responsible for trade show, food and beverage and amenity operations management during the High Point and Las Vegas Markets.

Global engagement and marketing agency MCI has promoted Oscar Cerezales to the position of chief strategy officer. He has worked for the company for almost 15 years across Europe and the Asia-Pacific and Latin American regions.

Mobile Growth Association (MGA) is undergoing changes within its leadership team. After 14 years, MGA Founder and President Dave Westin will transition to chair of the advisory board and strategic speaker outreach, while MGA Co-Founder Jen Laloup has taken the helm as CEO and chairwoman.

Home décor and lighting industry veteran Patty Price has joined Dallas Market Center as vice president of leasing for the lighting industry. She will be responsible for the leasing strategy and merchandising of the venue’s 1 million-square-foot lighting marketplace, including showrooms in the Trade Mart and the bi-annual Lightovation trade show. Previously, Price served as executive vice president with Arteriors Home, where she was responsible for sales teams, agency relations, showrooms and trade shows.

Global strategy consultancy AMR International has appointed Michael Mandl as principal for its events ecosystem and technology practice. Based in New York, he will lead the company’s U.S. operations. For more than 15 years, Mandl has held numerous senior executive positions with both Reed Exhibitions and Informa, most recently serving as COO for Reed’s Brazil and Mexico divisions.

Twenty-year event industry expert Alex Young has been tapped to lead the company’s event services team. He was most recently director of registration at Informa Markets and worked at Experient in both project and account management roles.

Spectra, provider of venue management to the Owensboro Convention Center, recently welcomed two new sales managers to its Owensboro team: Jacob Whitfill, who previously worked with Spectra in its food and beverage department, and Megan Howard, who cut her teeth in the events industry working for country clubs and wedding and event planning companies.

Event staging and systems integration solutions company IMS Technology Services has hired live events video veteran and engineer Dave Wilbur as its new director of video. Over the course of more than two decades, he has worked on a countless array of events including large product launches, conferences, permanent video installations and other high-profile events in the high tech, financial and pharmaceutical industries.

AVIXA, the Audiovisual and Integrated Experience Association, producer of InfoComm, has appointed AV/IT Engineer Frank Padikkala, Kairos Solution Architect at Panasonic, to serve as chairperson of the AVIXA Diversity Council. In this role, he will work to advance diversity and inclusion within the global AV community via national and international outreach efforts.

Full-service brand experience agency CenterPoint Marketing has hired Bruce Powell as senior account manager. Powell brings more than 25 years of experience in the trade show and event industry as well as expertise in the exhibit rental space to his new role.

With 25 years of experience in the entertainment technology industry, Pretz has worked across the various market segments of concert touring, corporate trade shows, special events and broadcast. Prior to joining Main Light, he served as the cross rental manager at 4Wall Entertainment.

Have any People News to share? Reach out to lpsavas@tsnn.com.

Don’t miss any event-related news: Sign up for our weekly e-newsletter HERE and engage with us on Twitter,Facebook, LinkedIn and Instagram!