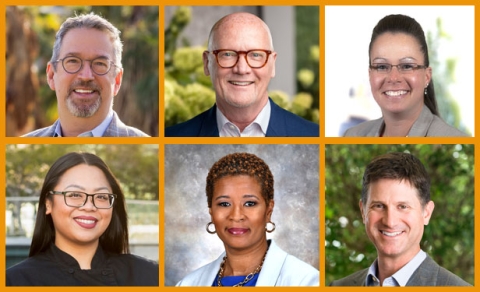 The trade show industry is moving full steam ahead into the new year with strong hiring and promoting momentum that appears to defy national concerns of a looming economic recession. Here’s all the latest people news you need to know!

Bringing more than 30 years of experience working with associations and for-profit companies, McNeil has served as a senior executive leader at Smithbucklin for more than a decade in a variety of roles.

SAVOR, the culinary division of ASM Global, has appointed experienced culinary professional Roxanne Galang as the new and first-ever female director of culinary for Moscone Center. After holding the position of chef de cuisine for the venue in 2017, Galang returns to the convention center with more than a decade of culinary expertise in the San Francisco area, including her most recent role as executive chef, premium catering for Bon Appetit at The Chase Center.

In her role at the convention center, Galang will manage all culinary activities, including supervising and coordinating all large-scale food preparation operations and daily food production; assisting with staffing schedules; and directing the training of chefs, cooks and other kitchen staff. She will oversee menu planning for all functions, leveraging her knowledge of food trends, sustainability and market conditions to create a premium F&B experience at events.

In the course of her career, Galang held roles as chef and head of catering for The Sarap Shop, and kitchen operations chef and food safety program director at Foxtail Catering & Events.

Leading trade show, exhibition and event services provider, Fern, has announced a key addition to its senior leadership team as well as a staff promotion.

Sheila LeMaster has assumed the role of senior vice president, strategic accounts group, in which she will work with the company’s account management team in delivering specialized account management, including an elevated organizer and exhibitor experience across all aspects of the design, production and service delivery for client events. She brings more than 25 years of experience working in trade show operations, exhibitor services and account management in facilities and as an official service contractor.

Katie Fitzgerald has been promoted from operations manager in Seattle to director of operations for the Pacific Northwest Region. Starting her career as an operations assistant, Fitzgerald became part of the Fern team in 2019 following the company’s acquisition of Triumph Expo, for which she worked for nearly 13 years.

Visit Spokane has named a new interim leader and recently added two new members to its marketing department. Following CEO Meg Winchester’s retirement on Jan. 1, Maureen Dodroe has assumed the helm as interim president and CEO after serving as the director of finance since Aug. 2012. Well-versed in the inner workings of the destination marketing organization, she will work to seamlessly lead the Visit Spokane staff through this transition until a replacement is found.

Following her previous role as advancement and marketing specialist with Chi Alpha Campus Ministries USA, Hannah Deubel has joined as marketing coordinator, and Katie Mathews has been appointed digital content specialist after previously working as a freelance brand designer for small businesses.

Event registration and lead retrieval service provider Custom Registration recently promoted Joshua Hoover from director of operations to vice president. Hoover began his career at the company in 2016 as a national account manager, and since 2019, has been involved in the company’s daily business operations, creating timetables and milestones for clients and being extensively involved in software development for client integration.

A division of the convention center’s People Services Department focused on developing creative approaches to optimize, streamline and transform convention center operations and culture, the Innovation Team will be led by Tim Tumminello as senior director of people services and innovation, and Kelli Zohar-Davis, assistant director of talent development and innovation.

A more than 20-year employee of the convention center, Tumminello was promoted from his most recent role as director of people services. He is an established HR professional and results-focused leader with an extensive track record of delivering talent acquisition, retention and talent development solutions to the facility.

Promoted from her 12-year role as talent development manager, Zohar-Davis has developed employee training programs and managed culture initiatives at the convention center, including its Innovation Lab. After serving as a high-school teacher and university lecturer, she gained an extensive background in the hospitality industry training food service industry professionals.

In her new role as chief diversity officer, Rocsean Spencer will be tasked with supporting the convention center’s policies and directives that mitigate bias, increase equitable outcomes and foster respect and inclusion while ensuring that the communications and People Services programs reflect the organization’s DEI goals.

Spencer most recently served as the facility’s Small and Emerging Business program director, a position created in 2019 to help promote the importance of diverse and small business inclusion at the venue. She previously served as compliance officer and prior to that, as certification officer for the City of New Orleans, Office of Supplier Diversity.

Peter Goepfrich has joined Skyline Exhibits as chief financial officer, responsible for creating and implementing all financial strategies and leading the finance, accounting and technology teams. He brings more than 20 years of experience in strategic financial planning and corporate development to his new role, with a track record of successfully executing financial strategies, developing company cultures and leading change initiatives while adapting to dynamic environments.

Goepfrich most recently served as CFO of MatrixCare and has more than 15 years of experience in the CFO role at companies including Ascentis, Qumu, Deluxe, API Healthcare and Vital Images. Prior to these positions, Goepfrich worked for seven years in PricewaterhouseCoopers’ audit practice.

Visit Greater Palm Springs welcomed Todd Burke as its first vice president of communications, tasked with supporting the CVB’s public relations and communications efforts as well as leading communications for its corporate initiatives that include workforce development, education, sustainability and DEI.

Visit Greater Palm Springs also recently tapped 30-year travel and tourism industry veteran Don Prince as director of Indian Wells Tourism. In his new role, Prince will not only work closely with the City of Indian Wells and the local tourism partners to drive awareness and increase visitation to the city but also promote Indian Wells through strategic marketing, sales and public relations programs.

Along with positions such as deputy director of the Arizona Office of Tourism and director of tourism for the City of Prescott, Ariz., Prince has also held senior business and tourism development strategy roles with marketing agencies specializing in hospitality and tourism brands in the U.S., Europe and Latin America. He has held sales and marketing positions with numerous cruise lines, including Royal Caribbean and Norwegian Cruise Lines, and also owned and managed two travel agencies focusing on luxury travel and cruises.

The Georgia International Convention Center (GICC) has appointed Ricki VanDuvall as its new director of sales and marketing, tasked with overseeing the team responsible for selling the facility’s convention space, as well as Gateway Center Arena and the Historic College Park Golf Course. VanDuvall will also be responsible for driving growth to the destination by raising awareness for all hotels and venues situated on the GICC campus and collaborating with the ATL District Airport CVB to deliver meaningful, revenue-generating events to the market.

A Certified Hospitality Sales Professional, she brings more than 20 years of hotel industry experience to the GICC team and has served in various sales capacities at hotel brands, including the Crowne Plaza Atlanta Airport, Radisson Hotel Group and Hilton Garden Inn Atlanta Airport.

Have some trade show-related people news to share? Please send announcements and high-resolution headshots to lpsavas@tsnn.com.