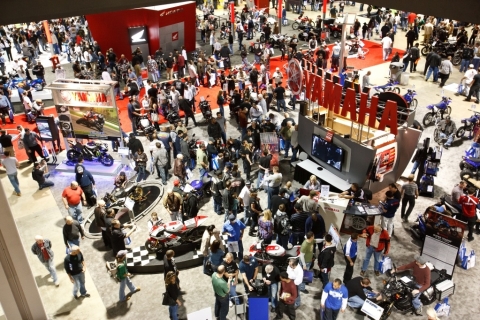 While it can’t be easy being a consumer show representing a distressed industry, the Progressive International Motorcycle Show Tour proved that a creative reinvention strategy can go a long way in maintaining and building attendance.

Owned by Advanstar Communications, the 17-week event for motorcycle enthusiasts, which converges annually in 12 cities November to March, recently concluded its 2011/2012 tour, boasting an overall attendance of nearly 500,000 people, according to show officials.

Last year, the show drew approximately 470,000 attendees, and for the past two years, has brought in more than 1,600 exhibitors, including motorcycle manufacturers, parts and accessories retailers and aftermarket companies, they added.

According to Danny Phillips, executive vice president for Advanstar’s Powersports & Automotive group, each show typically attracts 20,000 to 50,000 attendees and 100 to 250 exhibitors and can range in size from 90,000 to 180,000 net square feet, depending on the city and the size of its market.

But with motorcycle sales down almost 65 percent since the industry peaked in 2005, how does a show dedicated to this lifestyle market not only attract strong attendance, but also increase its participation in certain segments?

“The reason our attendance doesn’t exactly map (the industry) is because a motorcycle enthusiast who may not be able to afford a new vehicle will still indulge their passion,” Phillips said.

He added, “Given that our show represents a lifestyle event and we’ve marketed it that way and created lifestyle interest elements of the shows, we’ve retained a large number of (attendees) despite the fact they may not be buying new vehicles.”

For the past three years, organizers have been hard at work revamping the show and transforming it from an event into an experience, Phillips said.

“We took our show, its marketing message and its experience onsite and carved it up in line with the way in which the industry was dividing itself along vehicle and lifestyle enthusiasm lines,” Phillips said.

He added, “(For example), we took a group like female riders or high-income baby boomer men and started building experiences on the show floor and delivering those experiences as a message to that particular group.”

Restructuring the showfloor to make it more modern and streamlined also was a key part of the show’s reinvention, including new way-finding features and interactive booth displays created to enhance the attendee shopping and entertainment experience, Phillips said.

In addition, organizers worked with exhibitors to present their products and attract their target audience in more interactive and engaging ways, which proved to be a winning strategy, he added.

“The thing that we are proud of and that has resonated with our attendance is moving away from the reliance on the exhibitors to create the draw for attendees and crafting a lifestyle experience around what our exhibitors do,” Phillips said.

He added, “The attendance per some of those groups that we targeted has significantly grown because of what we did.”

Future plans to continue growing the tour include making the show more of a catalyst for global bike launches in its larger markets, Phillips said.

The 2012/2013 Progressive International Motorcycle Show Tour will kick off November 2012, although no official start date was available by press time.

Comexposium Acquires Indonesia Motorcycle Show
Comexposium has added Indonesia Motorcycle Show (IMOS) to its already successful joint venture partnership with Amara Pameran International (API). IMOS, the biggest…
North American International Auto Show Charity Preview Revs Up $5.1 Million for Detroit Children’s Charities
In a celebration of kids, cars and Motown, the 2018 North American International Auto Show’s (NAIAS) Charity Preview raced to the finish line with almost $5.1 million in…
How to Engage with Attendees at Trade Shows
There are several benefits associated with investing your time and energy in expanding the marketability of your product via a trade show. Trade fairs are powerful marketing…
Understanding the Trade Show Attendee Experience
Successful trade show marketing is about developing a media plan that aligns with and capitalizes on attendee behaviors in the market to accomplish a brand’s marketing goals…
Poultry, Beef and Firearms Shows Attract Record Attendance
Trade shows dedicated to the poultry, beef and firearms industries have been enjoying extra boosts in attendance recently.  The Cattle Industry Convention and National…
2017 NACS Show Boasts Record-Breaking Attendance and Showfloor
The NACS Show celebrated a record-breaking jump in attendance and size at its most recent event, held Oct. 17-20 at McCormick Place in Chicago. As the largest annual trade…