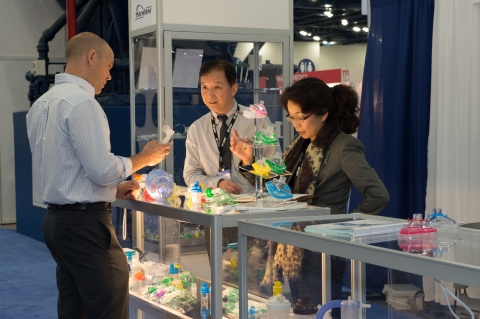 Drawing more than 120 exhibitors, who came from across the U.S. and 11 countries, as well as 2,017 registered attendees from 33 states and 22 countries, the launch of the show was seen as a strong platform to grow from, according to organizers.

“The inaugural staging of Medical World Americas has set a foundation for the growth of the World of MEDICA brand in the Americas,” said Tom Mitchell, president of Messe Duesseldorf North America.

While the size of the first show was in line with expectations, he added that the inaugural event is being viewed as a platform on which to build a bigger trade show and conference next year.

“Although the scale of the first staging was modest compared to that of world-renowned MEDICA, the quality of the programming and the exchanges that took place are a reflection of the vision for an event of this nature in the United States,” Mitchell said.

MEDICA typically attracts close to 5,000 exhibitors from more than 60 countries and 130,600 attendees.

Medical World Americas is a unique show because it is one of a handful in which Houston has a financial stake.

This year’s event featured several high-quality speakers and sessions, much of which were connected to the show’s partnership with the Texas Medical Center.

“I can say unequivocally that the level of education and the quality of our speakers would rival those one would find at any major international conference,” said Texas Medical Center CEO and Mecial World Americas Executive Advisory Committee Chairman, Robert C. Robbins, M.D.

He added, “We delivered a superior level of education, particularly for a first-year event.”

Some of the speakers included of Doris Taylor Ph.D., the Director of Regenerative Medicine Research at Texas Heart Institute/CHI St. Luke’s Health, who spoke about breakthroughs in creating a bio-artificial heart; as trauma surgeon Dr. Carl Hauser, who was at the epicenter of the Boston Marathon bombings in 2013; and Heinz Foundation award winner Dr. Sanjeev Arora, who created Project ECHO, a medical education program that expands the capacities of primary care clinicians to manage serious, chronic, complex conditions in rural and underserved areas which has expanded to more than a dozen states.

Besides professional attendees and exhibitors form the medical world, the event also attracted the notice of staff from five United States Senate and Congressional offices, as well as local public officials and staff.

“As we had envisioned, Houston and our medical community provided the ideal platform for bringing together an international community of life science professionals,” said Greg Ortale, president and CEO of the GHCVB.

He added, “In addition to the conference program, many of the attendees realized extremely valuable business connections, which highlights one of Houston’s great strengths as a host city.”  He went on, “one of the advantages of holding this conference in Houston every year is that it will give our companies in the healthcare space a home-field advantage in reaching the rest of the world.”

Next year’s show is scheduled April 27-29 at the George R. Brown CC.