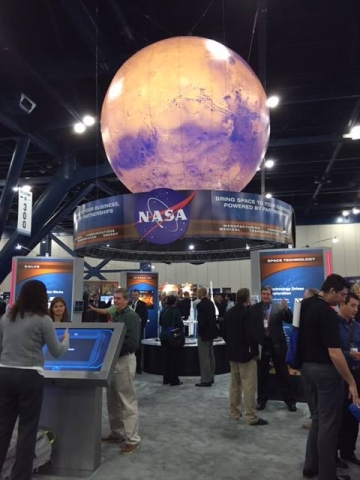 "We could not have asked for a better launch for SpaceCom,” said NTP Founder and Chairman Robert Harar.

He added, “We exceeded expectations in nearly every metric, which is exceptional for a launch event.  NTP has produced many events, but never one with such a unique partnership structure that brought so much to the table. Houston could not have been a better location or partner for SpaceCom."

Satellite Applications Catapult CEO Stuart Martin said in his Nov.18 keynote, "In the last 24 hours, SpaceCom has become the premier event for the commercial space industry."

Here are some of the highlights from SpaceCom 2015.

-  Attendees representing 37 states and 23 countries, with delegations from the United Kingdom and Italy

-  100-plus booths showcasing innovative and collaborative products and services

-  More than 50 media representatives from around the world

-  Taped address from Sen. Ted Cruz and two feeds from astronauts aboard the International Space Station

SpaceCom was born out of the desire of the Houston community to showcase the current advancements in space technology, as well as seed the new markets that are created at the intersection of space and other industries, according to show officials.

In 2012, officials from JSC connected with Visit Houston, which already has successfully partnered in the creation of other shows including Comicpalooza and Medical World Americas.

Next, a taskforce including representatives from NASA JSC, Rice University, Houston Airport System, economic development agencies and others was formed to examine the feasibility of such an event.

Once the concept proved viable, Visit Houston approached National Trade Productions, a leader in conference and trade show management, to help make it a reality.

"I think what's unique about SpaceCom is the seamless partnership that was created between a quasi-governmental agency with Visit Houston/Houston First, a full-fledged government agency with NASA and a private sector company like NTP," said Michael Heckman, vice president for Partnerships and Event Development at Houston First Corp.

He added, "Despite the different perspectives, we were able to come together and execute this event in a way that will build a foundational, first-of-its kind marketplace for the space commerce industry and create a legacy event for the Houston region."

World’s Largest RV Show in Germany Draws More than 100K Attendees
Held Aug. 29–Sept. 6 at the Düsseldorf Exhibition Centre in Germany, CARAVAN SALON, the world’s largest RV trade fair and consumer show, drew 107,000 mobile travel and…
ASAE Draws More than 1,500 to Xperience Design Project
ASAE hosted its Xperience Design Project (XDP), April 19-20, at the Gaylord NationalResort & Convention Center. The two-day event drew 1,512 association professionals …
UFI Congress Brings More than 300 Attendees to Bogota, Colombia
More than 300 attendees from 46 nations gathered Oct. 29-Nov 1 in Bogota, Colombia, for UFI, The Global Association for the Exhibition Industry’s 81st Congress The event has…
CONEXPO Latin America Debuts in Chile with More Than 32,000 Attendees
The Association of Equipment Manufacturers’ CONEXPO-CON/AGG already is the largest show in the United States, and now it’s reaching new heights in South America as well.…
New SpaceCom Show Set to Take Off in Houston in 2015
A new show that will explore the business of space - the Space Commerce Conference and Exposition (SpaceCom) – is set to launch Nov. 17-19 at the George R. Brown…
CVBs Partner with Event Planners to Draw More Attendees and Exhibitors to Destinations
Trade show and meeting planners choose their destinations carefully, bringing many factors into the decision-making process. One factor is the city’s appeal as a travel…