World Meeting of Families Celebrates a Record-setting Event in Philadelphia 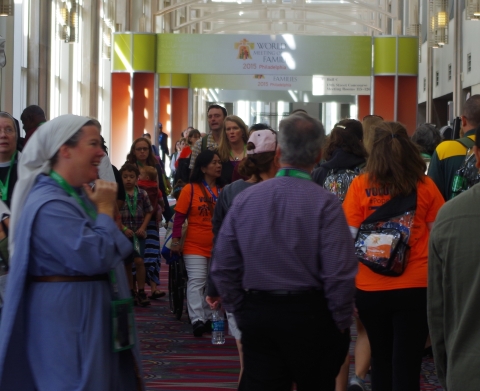 Approximately 20,000 attendees from 100 different countries came to Philadelphia for the World Meeting of Families (WMOF) Congress, held Sept. 22-25 at the Pennsylvania Convention Center.

This year was the first time the congress was held in the United States.

Held every three years, the WMOF is the largest Catholic gathering of families. The theme of the World Meeting of Families – Philadelphia 2015 was “Love Is Our Mission: The Family Fully Alive,” emphasizing the impact of the love and life of families on our society.

Adult attendees received practical tips on how to improve their family and strengthen their relationship with God from a panel of internationally known speakers.

The youth in attendance had their own program featuring speakers, performers and activities, including “Fill a Bag, Fill a Heart." Kids aged 6-17 filled bags with personal items and handwritten notes to help those in need.

Not only did the Congress break records for the largest Catholic gathering of families, but also representatives from the Guinness World Records announced another record-breaking event.

WMOF broke the record for the largest number of contributors to a paint-by-numbers painting.

Satire Walker, Noel Zemborain and their four children contributed the final strokes to the painting. Their family drove the farthest to attend the WMOF, 13,000 miles from Argentina in a Volkswagen camper van.

The Congress wrapped up on Friday, Sept. 25, with a keynote delivered jointly by Pastor Rick Warren, senior pastor of Saddleback Church in Lake Forest, Calif., and Cardinal Seán Patrick O’Malley, archbishop of Boston.

“What we need is to revitalize our worship,” Warren said.

In his speech, Cardinal O’Malley thanked everyone for their participation in the conference and also for all they do to strengthen the family.

But for many attendees the end of the conference signaled the approach of the main event, the Pope’s visit to Philadelphia.

One family from Texas said that while the conference, with its focus on unity and joy energized them, they were truly looking forward to being in the presence of the Pope.

Upon arriving in Philadelphia on Saturday, Sept. 26, Pope Francis celebrated Mass at the Cathedral Basilica of St. Peter and Paul and then delivered a speech to a crowd of about 50,000 people on Independence Mall.

Later that night, Pope Francis attended the Festival of Families, a major event that is part of the World Meeting of Families gathering. Some of those performing for the Pope were Aretha Franklin, Andrea Bocelli, The Fray, Jim Gaffigan, and the Philadelphia Orchestra. Mark Wahlberg filled the role of master of ceremonies.

IAEE Celebrates 2021 Award Winners at Expo! Expo! in Philadelphia
The International Association of Exhibitions and Events (IAEE) chose a stellar lineup of recipients for its 2021 IAEE Awards, which recognize outstanding contributions by…
LGBT Meeting Professionals Association Celebrates Meetings and Event Professionals During Pride Month and Beyond
Organizations far and wide are celebrating Pride Month by showing their support for the LGBT+ community through awareness-raising efforts, fostering more diverse and…
Meet Ricky Kalmon, the Celebrity Hypnotist Changing Mindsets at Meetings
Ricky Kalmon isn’t your everyday motivational speaker. A mindset expert, celebrity hypnotist and motivational speaker by trade, Kalmon works to engage and inspire event…
A Record-Setting Event for PACK EXPO Las Vegas and Healthcare Packaging Expo
The 2019 edition of PACK EXPO Las Vegas and Healthcare Packaging EXPO was a huge success by all accounts. Show owner and producer PMMI, The Association for Packaging and…
Philadelphia CVB Gets Animated About Missing Meetings
Let’s face it: Not everything about meetings is great. But after the way 2020 played out, event professionals are yearning for even the awkward stuff. Rather than mope about…
How Groups Are Celebrating Global Meetings Industry Day
Always a great opportunity to celebrate the importance of face-to-face gatherings big and small, Global Meetings Industry Day takes on added significance this year. Just as…