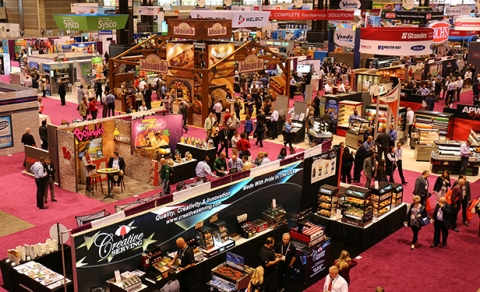 The NACS Show celebrated a record-breaking jump in attendance and size at its most recent event, held Oct. 17-20 at McCormick Place in Chicago.

As the largest annual trade show and conference for the U.S. convenience and fuel retailing industry, the 25th annual NACS Show boasted a 7 percent increase in overall attendance, drawing in 24,940 attendees from 63 countries, and a 3.3 percent growth in buyers (classified as retailers and convenience distributors, including Petroleum Equipment Institute registrants), according to The Association for Convenience and Fuel Retailing, which owns and runs the show.

He continued, “Small format retail, including convenience retailing, has grown even as other retail channels lose sales to the internet. Our industry continues to focus on its value proposition of immediate consumption as it grows its foodservice offer. At the same time, we are targeting our educational offer and carefully managing the growth of the expo floor to ensure that our supplier partners get value.”

The event’s general session speakers featured industry, business and leadership experts, while attendees had the chance to choose from 60 education sessions covering relevant industry topics ranging from foodservice and food safety, to leadership development and marketing, to technology and fuels.

Making its debut this year was the popular NACS Ideas 2 Go program, a fast-paced video program of emerging concepts designed to redefine convenience.

The expo’s New Exhibitor area, featuring 200 exhibitors new to the convenience and fuel retailing industry and the NACS Show, also was a popular destination for attendees.

In its fourth year at the show, TechEdge attracted 470 industry technology professionals who participated in the program’s specialized education sessions on topics ranging from data security to how to improve overall operational efficiency.

“I love the versatility of the ‘C’ with our rebrand,” said Henry Armour, NACS president and CEO. “It certainly stands for convenience – but it can stand for so many other aspects of our industry.”

Other unique industry facets that the “C” represents include customers, Armour added, referring to the fact that the U.S. convenience store industry serves more than 160 million customers per day – half of the country’s total population.

“C” also stands for community, a message that was exemplified by charitable donations made to local food banks both before and after the NACS Show.

Prior to the event, Tyson Foods and NACS partnered to donate a truckload of protein totaling 36,060 pounds to the Greater Chicago Food Depository to help fight hunger in the Chicagoland area. The Food Depository will distribute the donated food – an equivalent to 144,240 meals – through its network of partner agencies that include food pantries, soup kitchens and shelter services across Chicago and Cook County.

At the conclusion of the show, more than 52,000 pounds of refrigerated and frozen food product was collected by Greater Chicago Food Depository volunteers, while the Ronald McDonald House collected 70,000 lbs. of shelf-stable goods for use in their local facilities and other charities.

“We truly believe that c-store doesn’t just stand for convenience store – it also stands for community store, and we are proud to join Tyson Foods in supporting the Chicagoland community that we call home this week during the NACS Show,” Lenard said.

“Our industry’s commitment to the communities we serve is truly amazing,” Sheetz said during his Oct. 20 NACS Show speech. “We collectively contribute $1 billion a year to charities.”

He continued, “But it’s not about just stroking checks. It’s about volunteering time, donating product and supporting first-responders. There is no industry more grounded in their communities than we are.”

NACS Show 2018 Breaks Attendance Records, Grows Showfloor
The NACS Show has broken its attendance and expo records once again. Held Oct. 7-10 at the Las Vegas Convention Center, the annual four-day event for the U.S. convenience…
Houston Boasts a Record-Breaking 2017 Convention Year
Hurricane Harvey may cause 2017 to go down in history as a tumultuous year for the City of Houston, but that didn’t stop the city from coming back strong while setting…
OFFPRICE Scores Record-breaking Showfloor, 5.5-percent Buyer Attendance Increase
The first day of OFFPRICE, held Feb. 15-18 at the Sand Expo & Convention Center in Las Vegas, kicked off with crowds of buyers in the aisles, with some exhibitors calling…
CES Boasts Largest-Ever Showfloor in Show’s 53-Year History
The 53rd annual CES took place Jan. 8-11, attracting around 180,000 attendees and 4,500 exhibiting companies from more than 155 countries. Occupying 2.9 million net square…
PACK EXPO and ICUEE Draw Robust Attendance, Showfloors
Shows in the packaging and construction/utility equipment industries drew strong attendance and growing showfloors recently in Las Vegas and Louisville, respectively. PACK…
JCK Wraps 30th Anniversary Show With Record-Breaking Attendance and Sales
The largest and most iconic global jewelry buying experience, JCK, operated by RX, brought a gem of a show to Las Vegas in June, exceeding pre-pandemic 2019 attendance…