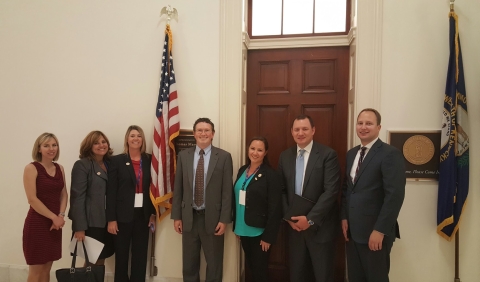 The Exhibitions Mean Business’ 2nd Annual Exhibitions Day, held June 9 on Capitol Hill in Washington, D.C., brought together 112 participants from 19 states to participate in industry-related events, including nearly 100 meetings with policy influencers and members of Congress.

The meetings focused on key issues that could affect the more than $71 billion contribution the trade show industry has to the GDP.

Some of those issues included Jolt Act, Open Skies, Trade Promotion Authority and government employee attendance at trade shows and events (see more HERE about issues), according to David DuBois, president and CEO of the International Association of Exhibitions and Events.

“We also gave a general overview of the economic impact of exhibitions and events to local and national economies,” he added.

This VIDEO produced by Convention News television gives just a small window into the busy day.

Some of the participants, including DuBois, shared with TSNN who they met with, what they discussed and their thoughts on the day:

What kind of feedback did you receive? All very positive. We had 15 member level meetings, those are meetings with the actual senator or house representative. Many remembered us from last year during the inaugural event and the Exhibitions Day participants have been reporting that their meetings were very positive.

Why was it important for you to take part in Exhibitions Day? Exhibitions Day is important to me because it allows me along with a wide range of industry professionals to meet with federal lawmakers and discuss the issues that are currently or will affect our industry. Even though all of our shows are different, Exhibitions Day brings us together as one cohesive voice. It creates a rallying point for the entire year.

Why was Exhibitions Day important for the overall trade show industry? This event is a cornerstone of what the Exhibitions Mean Business campaign is all about. The EMB campaign was created to raise awareness and elevate the profile of the exhibitions and events industry and what that means to local and national economies.

Whom did you meet with? Since our biggest annual convention is in New York, I wanted to meet with the NY contingent of the Congress. We got to meet with staffers from Senators Gillibrand and Schumer, as well as from Reps. Crowley and Maloney. Unfortunately, Rep. Nadler was not available to meet, but we were able to leave some documents for his office to review.

What did you discuss? The JOLT Act was first and foremost, as we need to increase the ease for our international attendees to gain visas. The new Open Skies discussion was also a popular conversation, since it deals with the same issues. In the House we also addressed the TPA debate, but since the Senate has already voted on it we didn’t see the use.

What kind of feedback did you receive? We met with all Democrats, and received a very partisan response. Everyone loves the JOLT Act, won’t support TPA (unfortunately, even if they personally agreed with it), and they were not all that familiar with the Open Skies debate – which is a good thing for us. While they are all in disagreement with us on TPA, I do think it was valuable for them to hear our concerns.

Why was it important for you to take part in Exhibitions Day? To represent both the NRF and the meetings and exhibition industry on Capitol Hill, and to make sure that D.C. knows the impact that the conference and convention industry have on American economy. When you have an industry with such impact ($71.3B), it is good to get in front our congress every once in a while and remind them of our impact and influence on their constituents.

Whom did you meet with? Because I am from California, I was scheduled to meet with staff from the following offices: Senators (both California) Dianne Feinstein and Barbara Boxer: House of Representatives (both San Diego) Susan Davis and Scott Peters

What did you discuss? U.S.-based suppliers in several of the industries served by mdg clients are faced with ongoing domestic consolidation and view the ability to expand internationally as their best hope for significant growth. Many of these suppliers exhibit at trade shows, in large part, to meet foreign buyers and make connections that will facilitate their expansion into international markets. We wanted to ensure that lawmakers were aware of the impact that international participation at trade shows has on domestic businesses and we wanted to encourage their support of legislation that facilitates travel.

What kind of feedback did you receive? We specifically asked the congressional staffers if they had ever participated in a trade show or conference and the answer, overwhelmingly, was "no." I think it's important that we don't assume professionals in Washington, D.C. understand the impact trade shows have on the industries they serve and the economy as a whole, in regards spreading knowledge, facilitating innovation, capital expenditures, etc. We really should stay in front of them with our issues, rather than just visiting once a year.

Why was it important for you to take part in Exhibitions Day? Although Scott Peters already supports all of the initiatives we were there to discuss, I still wanted to visit him to say 'thank you' for agreeing to participate as a moderate in the upcoming U.S. News STEM Solutions. If we can get more politicians involved in our events, it's more likely they will see the impact they can have. This particular event highlights collaboration among businesses, academia and government in order to find answers that will help the nation fill a pipeline of skilled workers.

Whom did you meet with? I met with representatives from four House members and two Senators, including; Sen. Paul (KY), Sen. Portman (OH), Rep. Chabot (OH1), Rep. Chaffetz (UT3), Rep. Love (UT4), and Rep. Massie (KY4). In each case we met with staff, usually the Legislative Director, with the exception of Rep. Massie who we met with directly. I spent my time with members of Congress from Ohio, Kentucky, and Utah – Fern’s headquarters and my office is in Ohio, I am a resident of Kentucky, and Fern has a large distribution center in Southern Utah, not far from Las Vegas. Other participants of the meetings I had, included representatives from the Cleveland CVB, the Louisville CVG, AEM, Social Tables, and Fern.

What did you discuss? Most of our discussions were focused on raising awareness of the industry including its economic impact, the JOLT act (primarily the Secure Travel Partnership provisions), we also typically briefly discussed the Open Skies agreements and the current discussions related to them and government employee travel and attendance at shows.

What kind of feedback did you receive? All were very friendly, as they usually are. Support for JOLT was high, and I suspect at least a couple of the representatives will cosponsor and all will review closer as a result of our discussion. All understand the industry better and its economic impact.

Why was it important for you to take part in Exhibitions Day? We are a large industry with ties to every state and every industry and yet still in many ways “under the radar”. We employee tens of thousands of people and bring real value to the communities we operate in, large and small. We work closely with governments, business, and non-profits daily. We have every reason to be active with our government and I think a day of personal investment shows our willingness to contribute and as a result we grow our exposure and recognition. If we don’t engage we can’t expect our concerns to get addressed automatically.

For more information on Exhibitions Day and how to take part in next year’s event please visit www.ExhibitionsMeanBusiness.org.

Record-breaking 112 Trade Show Professionals Take Part in #ExhibitionsDay on Capitol Hill
For the fourth year in a row, the International Association of Exhibitions and Events spearheaded #ExhibitionsDay, held June 6-7 in Washington, D.C., at which 112 trade show…
#ExhibitionsDay Hosts Record 125 Attendees, 100 Meetings on Capitol Hill
This year’s #ExhibitionsDay, held June 5-6 in Washington, D.C., drew a record-breaking 125 trade show professionals to Capitol Hill to meet with congressional representatives…
Trio of Packing/Printing Shows Attract Record Participation in Indonesia
INDOPLAS, INDOPACK (incorporating INDOPROCESS) and INDOPRINT 2014, held recently in Jakarta, attracted more than 22,000 trade professionals from Indonesia and the surrounding…
LIGHTFAIR International 2018 Breaks Records in Size and Participation
LIGHTFAIR International (LFI) set a new record at its 29thannual edition, held May 6-10 at McCormick Place in Chicago, with increased registration and a larger expo footprint…
ISA International Sign Expo 2017 Breaks Participation Records in Las Vegas
The ISA International Sign Expo 2017 enjoyed a record-breaking show in Las Vegas. Held April 19-22 at the Mandalay Bay Convention Center, the annual trade show and conference…
International Association of Exhibitions & Events Has Busy 2014
The International Association of Exhibitions & Events had a very busy 2014 as evidenced by the list of accomplishments it had throughout the year. "2014 was an…