After Live Event Cancels, Speakers Band Together to Launch Successful Virtual One 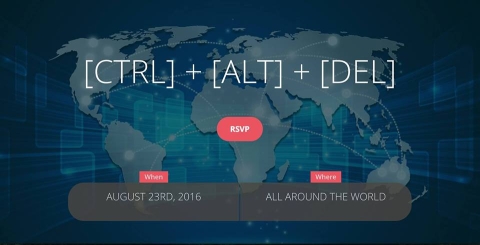 The Future of Events was meant to be a launch, scheduled Aug. 22-24 in Amsterdam, but every starter event’s worst nightmare occurred when organizers decided they needed to cancel it a month beforehand.

A stellar line up of speakers had been scheduled, airline tickets and hotel accommodations were made. Despite the last-minute setback, some long-time event professionals banded together and decided to hold a brand new event any way, and it would all be online.

“(We didn’t want) to lose the chance to have a brain date with the thought leaders of our industry that were scheduled to come to this event, we decided to do something about it and fast,” said Dahlia El Gazzar, owner of DAHLIA+.

Teaming up with Liz King, owner of Liz King Events, and Aaron Kaufman, president of Fifth Element Group, and Will Curran, founder of Endless Entertainment, Gazzar said they moved quickly to create a completely new virtual event - [CTRL] + [ALT] + [DEL] – and promote it to the industry.

What was meant to be solely online, though, became something even bigger.

“We secured a stellar speaker line up and intended to have a virtual event, all on-line. The crowd wanted more,” Gazzar said.

She added, “They wanted to meet in person, so all of a sudden 15 popup events were created for this event in different cities internationally, including Capetown, South Africa, Amsterdam, London, Belgium, multi-cities in Canada and the United States.”

There was no charge to attend the day-long event, Gazzar said, everything was comped to make the event happen.

The organizers used a bevy of online tools to put the event together:

·         Slack to communicate with all sponsors, speakers, organizers, all the popup organizers and main ones had different channels

·         Google Drive to collaborate on schedules, sessions, speakers, and docs

The actual virtual event was held through GoToMeeting, although Gazzar explained there was a glitch initially when more than 1,000 people signed on in the beginning of the event.

“Everyone that was logged on at the start had to be kicked off … We didn’t know we were going to have that many people, so our license wasn’t allowed that many people, we had to bring in GoToMeeting to help asap!” Gazzar said.

The sessions touched a broad range of topics, such as talking about the new breed of event strategist, event technology trends, looking at fresh ways to design meetings, how to create more digital engagement and the ROI on marketing, to name a few.

Speakers included a who’s who from the event industry, including David Adler, CEO of BizBash Media; Eric Ly, one of the founders of LinkedIn; Corbon Ball, owner of Corbin Ball Associates; Julius Solaris, founder and editor of EventMB; and Stefania Conti-Vecchi, founder and CEO of EVENTagist, to name a few.

The very active Twitter feed from the event can be found HERE and a video HERE.

And, for those who are now chomping at the bit to see this virtual event for yourself, HERE is the replay.

Gazzar said the main goal in holding the event was to “co-create and collectively create the brain date and include as many passionate people as possible.”

Stay tuned, Gazzar said they definitely will be holding [CTRL] + [ALT] + [DEL] again in the future.

Trade Show Industry Veterans Band Together to Form Event Consultancy Company
A group of veteran industry professionals has launched a consultancy company – the Event Advisory Group – designed to help associations, trade show organizers, publishers and…
Virtual Event Successes: ASAE, Vet Show @ Home and Event Tech Live Hit the Virtual Sweet Spot
As trade shows begin to trickle back in person as the industry prepares for a deluge this fall, virtual events are going stronger than ever. Take a look at some successful…
5 Speaker Tips and Best Practices For Your Virtual Event
In the past four months, events have radically shifted from in-person gatherings to virtual events. Speakers play an integral role and can make or break the attendee…
3 Strategies for Keeping in Contact with Your Customers After Your Live Event
Once your event is over and everyone has gone home, your job isn’t finished. After all, an event’s ROI isn’t immediately measurable. It can take up to 10 weeks after the show…
The Do’s and Don’ts of Hosting a Successful Virtual Event
As consumers and attendees increasingly rely on smartphones and digital tools, marketers look to bridge the online and physical worlds to maximize engagement and create…
Five Must-Haves for Virtual and Hybrid Event Success
Virtual and hybrid events have matured and evolved a great deal over the last couple of years, and they will keep connecting us long after the pandemic is over. Even as…