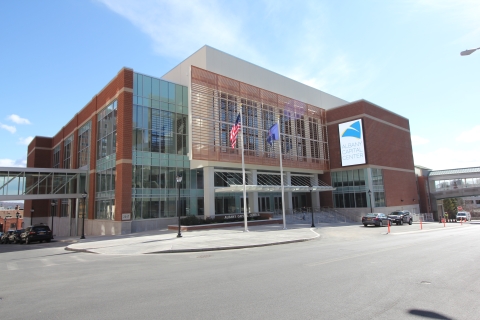 The city of Albany has unveiled the Albany Capitol Center, a $78.5 million, state-of-the-art meetings and convention facility.

As the newest addition to the city’s downtown Capital Complex, the ACC joins the Empire State Plaza Convention Center, The Egg Performing Arts Center and the Times Union Center to comprise a four-building campus now known as the largest meetings and event space in upstate New York, with 160,000 square feet of combined space.

Completed on time and on budget, the convention center will be run by SMG and is expected to bring $26.5 million in spending and 100,000 visitors annually to the state’s Capital Region.

“This new convention center is key to the continued economic development of this area and will play a pivotal role in drawing events and visitors from around the country,” N.Y. Governor Andrew Cuomo said.

He added, “This modern convention facility will help ensure that the Capital Region remains competitive for years to come, while also having a significant, positive impact on the community.”

Built to supplement the existing facilities that downtown Albany already offers, the ACC was designed with attributes those venues don’t possess, thus creating a larger Capital Complex with four unique facilities that can operate individually or combined to offer a wide array of uses, according to Doug McClaine, ACC general manager.

Connected to the Times Union Center, Empire State Plaza and Renaissance Albany Hotel via enclosed walkways, the convention center is designed to host a diverse array of trade shows, consumer and social events and is capable of hosting meetings for up to 5,000 guests.

·      Enclosed, climate-controlled walkways with direct access to the Capital Complex

·      Energy Star equipment, LED lighting and energy efficient design will result in savings of nearly $73,000 in gas and electric costs and result in CO2 reductions of more than 670,000 pounds annually

·      26’ high ceilings to accommodate NCAA basketball practice courts in support of tournaments at the Times Union Center; heavy duty flooring to support automobile and trade displays, and high-end finishes and unique color-changing LED display lighting on the ceiling that can display logos, patterns and shapes in motion or stationary position from a color palette of 16 million choices on the second level

·      Passenger and freight elevators and escalators access on all levels

·      Event booking and management of the facility handled by SMG

He continued, “This project took much collaboration with local and state government, a strict construction timeline and a commitment by all parties to deliver the project on time. The ACC is a testament to what this area can achieve, and we look forward to seeing its schedule fill up in the coming weeks and months ahead as well as opening the door in the Capital Region to new shows and events.”

“The Albany Capital Center is truly a multi-purpose facility and can handle everything from national conventions and sporting events to graduations and social gatherings,” said Shannon Licygiewicz, ACC director of sales.

She continued, “While the ACC is able to play host to many different types of events, its sales team’s main focus will be on increasing the economic impact in Capital Region. SMG, who was hired by the Albany Convention Center Authority to manage the Albany Capital Center, will focus their marketing and selling efforts around attracting that national and regional convention business to the Capital Region.”

This year’s events are expected to reap 3,750 hotel room nights, of which more than 3,200 are new business for the capital city, while 28 additional events have been booked through the next five years, bringing the ACC’s official group business tally to 90 events booked through 2021, according to ACCA officials.

“Based on the feedback we’ve gotten so far, we already know that when we open our doors, Albany area residents and visitors alike are going to be impressed and are going to want to spend time here,” said Doug McClaine, general manager of the ACC.

He added, “We have a lot to look forward to as we continue to grow and expand our talented team, building what will be the premier events venue in the Capital Region.”