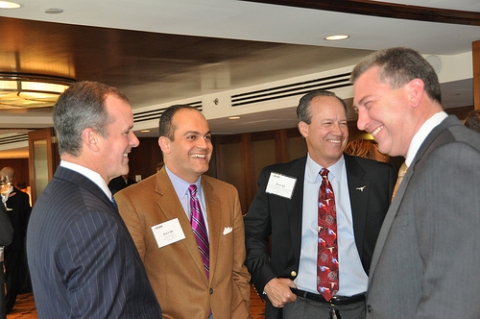 Timed with the American Society of Association Executive’s annual legislative fly-in for American Associations Day, held March 18-19, the organization gathered letters to deliver to Senate offices opposing a proposed amendment to H.R. 933 that would prohibit federal agencies from sending more than 25 employees to any meeting or conference held in the United States.

The amendment, sponsored by Sen. Tom Coburn (R-OK), which was offered in response to reports last year of wasteful conference spending by the General Services Administration and the Department of Veterans Affairs, was eventually dropped when H.R. 933 passed, allowing the government to continue being funded through the end of Fiscal Year 2013.

More than 350 associations heeded the call for letters that were delivered to Senate offices March 18 stating why they felt the Coburn Amendment would be harmful.

“ASAE supports lawmakers’ efforts to curb wasteful or unnecessary government spending, but Amendment 67 would arbitrarily limit the number of federal employees who can attend a meeting or conference to learn about the latest industry practices and pick up insights from the private sector that could lead to more effective policymaking,” said ASAE President and CEO John H. Graham IV, CAE.

He added, “Isolating the government from the industries it regulates is a bad idea. We need to do everything we can to protect the mutually beneficial collaboration that occurs when government and the private sector meet face-to-face.”

Government attendance at meetings was one of the key issues that participants in American Associations Day took to Capitol Hill earlier this week.

ASAE’s annual legislative fly-in, which was part of the overall Power of a Week March 13-19, is attended by association professionals from more than 30 states, who come to Washington to share their concerns with their legislators and promote the value of the association community to the economy and society as a whole, according to ASAE officials.

Please click HERE to read the Coburn Amendment S.AMDT 67. This amendment is one of 99 filed that were originally attached to continuing resolution H.R. 933.

ASAE Opens Call for 2018 Board of Director Nominations
ASAE launches the call for association professionals and industry partners to apply for open positions on the ASAE and the ASAE Foundation Board of Directors to help lead the…
Associations for Meetings, Trade Show Industry Express Concern Over Travel Ban
With the stroke of a pen last Friday, President Donald Trump put in place an Executive Order calling for the ban of Syrian refugees entering the U.S. for the next four months…
2014 ASAE Annual Meeting & Exhibition in Nashville, Tenn., Draws Most Association Execs Since 2007
Music City was an undeniable draw, with nearly 6,000 overall attendees and the highest number of association executives coming to the 2014 American Society for Association…
Survey Points to Importance of Face-to-face Meetings for Government Agencies
Meetings Mean Business, a coalition formed in 2009 to spread the word about the value that business meetings, travel and events bring to the U.S. economy, recently conducted…
Limiting Limitations
You've got to know your limitations. I don't know what your limitations are. I found out what mine were when I was twelve. I found out that there weren't too many limitations…
Limelight Shines on Detroit with 5,300 Attendees at 2015 ASAE Annual Meeting & Exposition
Detroit recently savored the long-overdue limelight when 5,300 attendees took in all that the city has to offer at the 2015 American Society of Association Executives’ (ASAE…