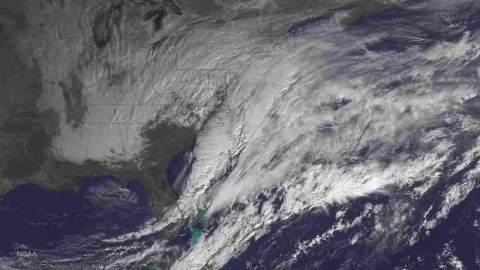 A massive blizzard with up to three feet of snow predicted in some parts of the Northeast, as well as a few thousand flight cancellations, isn’t stopping organizers of one of the largest medical shows in the country – Yankee Dental Congress, with more than 25,000 expected attendees – from doing all they can to get the show open Jan. 29-31 at the Boston Convention & Exhibition Center.

Katie Hauser, director of communications for the Massachusetts Convention Center Authority, which oversees the center, said all of the show’s stakeholders had a meeting today to discuss how to keep everything on schedule, despite the weather.

“It really goes to show how everyone can come together,” Hauser said, adding that Freeman, labor that works at the venue, the venue’s public safety team, catering and AV, basically anyone involved with getting the show open on Thursday, is pitching in to help.

“Tomorrow will be a light move-in day,” Hauser said. “We’re putting all essential staff up in a hotel tonight.”

In addition, the exhibit floor was being kept open this evening for a few extra hours, and there would be extended hours on Wednesday and Thursday as well.

On the Yankee Dental Congress Facebook page under a message that said they would notify everyone by e-mail if there were any cancellations, several commenters chimed in and said they would be jumping on trains just to make it there.

Boston isn’t the only major city with a show set to move in this week. In Philadelphia at the Pennsylvania Convention Center, the Philadelphia Auto Show opens its doors Jan. 31-Feb. 8.

The snow, however, is not expected to have any impact on the show’s move-in or attendees getting there, according to a spokesperson.

In a statement from Emerald Expositions, show organizers said: "The NY NOW team, Javits Center and Freeman are all working together to stay on top of the weather forecast and contingency plans are in development to ensure that all freight will be loaded in this week with as little disruption to your setup plans as possible.  The NY NOW  team will be at the Javits starting this evening to work with exhibitors and the facility."

Back in Boston, Hauser said, “Luckily, this isn’t the first time we have dealt with snow. The only difference is there will be three feet of it.”

She added the fact that everyone is moving forward just points to “another example of these resilient meeting planners. We will be ready.”

Boston Strong: Pushing Hard, Despite Challenges
By Douglas Emslie, Tarsus Group Managing Director Firstly a big thank you to everyone who has sponsored me for the Boston Marathon. I really appreciate it, and it will go a…
Despite Government Shutdown, Washington, D.C. is Open for Business
With the U.S. government shutdown still in effect — and stretched longer than any other in history — many association meeting planners and trade show organizers are concerned…
Despite Street Protests, Hong Kong Exhibition Industry Open for Business
After a few months of weekly street protests in Hong Kong that impacted the airport for a few days and caused street closures, the city’s exhibition industry forged ahead…
Despite Predicted Negative Show Rotation, Global Experience Specialists Sees Q2 Revenue Uptick
The second quarter of this year was supposed to be a challenging one for Global Experience Specialists and its parent company Viad, with $12 million in predicted negative…
Shenyang New World EXPO Will Have Soft Opening March 1
In preparation for the Shenyang New World EXPO soft opening on March 1st, EXPO's senior staff completed final training at the Hong Kong Convention and Exhibition Center…
IMEX Predicts a Focus on Humanity Will Be at the Heart of 2018 Industry Trends
After years of seeing technology revolutionizing the meetings industry and accelerating the rate of change in how people live and work, there will be a return to a focus on…