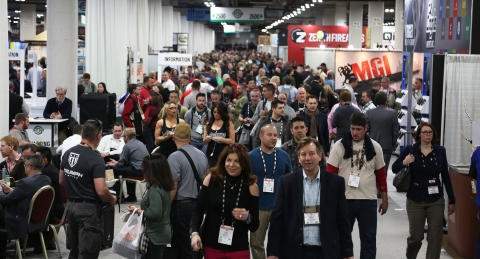 As the trade show industry keeps on growing, shows and suppliers continue to find new ways of working together.

CNTV (Convention News Television) recently signed a trio of contracts, two of which expand on existing business and the third picking up a new client.

“Our customers love it,” said Mark Bogdansky, senior director of Meetings and Events for the Auto Care Association. “When we decided to enhance the AAPEX TV brand and launch a year­round program, it was a given that CNTV would produce it. Not only do they have a top shelf product, but they have researched and learned our industry, to be able to suggest topics for news stories and interviews. And they do it all in an incredibly lean and efficient manner.”

CNTV renewed its collaboration with NSSF SHOT Show in 2017 with a multi­year agreement. This year’s show took place Jan. 17­20 in Las Vegas. CNTV provided same­day, TV­style programming that provided maximum exposure and value to show organizers and sponsors. The programs played back daily in approximately 50,000 hotel rooms, online, via social networks, and on dozens of shuttle buses. NSSF SHOT Show TV is a significant revenue source for the event, and is used year round to market the show.

The Barcelona Convention Bureau, the principal program of Turisme de Barcelona for business tourism, has appointed Development Counsellors International (DCI) to advance the selection of Barcelona as a meetings and incentives location. DCI will focus on securing new business meetings, conventions and tourism revenue for Barcelona from the North American market.

DCI also will support the marketing and promotion of Barcelona in partnership with the Barcelona Convention Bureau through initiatives focused on enhancing existing relationships with association executives, corporate meeting planners and incentive planners throughout the United States and Canada.

CompuSystems will be the official registration and lead retrieval provider for Emergency Nursing 2017 and 2018.

The Emergency Nurses Association will also be utilizing CompuSystems' ConnectME Show App to help attendees get the most out of attending the event. From schedule building to social media the show app is the ultimate guide to the Emergency Nursing event.

Comexposium is the latest major international organiser to join the Explori research platform. Explori now boasts a global client base of over 1,650 exhibitions and conferences contributing to the biggest dataset of event benchmarks.

Comexposium’s CEO Renaud Hamaide said, "Our expansion plans are about both organic and acquired growth and Explori is key to our ability to understand the health and performance of existing assets, as well as those that we’re looking to acquire.”

From Jan 2017, all Comexposium international events will conduct their core customer research via Explori ensuring consistent benchmarking across the group, in all regions and all languages.

Explori’s CEO, Mark Brewster said “We’re delighted to welcome Comexposium to the fold. In the last few years, there has been a seismic shift in the profile of customer experience data, with the C-suite taking ownership of performance benchmarking in their organisations”. He continued “This reflects the fact that business leaders acknowledge that today’s customer experience is a critical driver of tomorrow’s profits.”

New Business Contracts: Core-Apps, CompuSystems, E.J. Krause All Score New Contracts
With business winding down into the holiday season, companies who provide services to the trade show industry continue to score new contracts before the end of the year.…
Explori, Centerplate, CompuSystems and More Forge Business Deals
While some industries tend to slow down in the summer, apparently the trade show industry hasn’t gotten the memo. A host of event organizers, vendors and venues have been…
New Contracts: Corcoran, SmithBucklin, Convention Data Services, EJ Krause All Gain Business
The summer months are over and fall officially has arrived, with several companies recently signing contracts. Corcoran Expositions has been retained by the Water Quality…
New Business Contracts: Stetson, CDS, eventPower and CompuSystems
While there has been an understandable drop in new and renewed business deals in the trade show industry lately, there have been some bright spots, particularly in the…
Business Contracts Renewals Abound as 2018 Comes to a Close
The Exhibition Services & Contractors Association Extended its management agreement with Augusta Group Management through 2023.  “The Exhibition Services &…
New Business Contracts: Shows, Venues Renew and Sign New Contracts
The St. John’s Convention Centre, National Association of Drug Stores and International Market Centers all either brought on a new supplier or renewed an existing contract in…