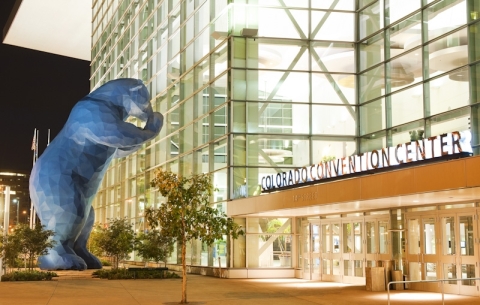 Denver voters overwhelmingly approved an expansion of the Colorado Convention Center by passing a special initiative Nov. 3.  The project will be paid for by funding that will come by extending current taxes that are set to expire in 2023.

“We’re thrilled to have the support of the people of Denver behind our city’s convention and tourism industry,” said Richard Scharf, president & CEO of VISIT DENVER, The Convention & Visitors Bureau.  This is the third time in recent years that Denver voters have strongly supported the travel industry, having previously approved an expansion of the convention center in 1999 and an increase in tourism marketing dollars in 2005.

Not many details on the new expansion are available at this time.  “We are just completing a master plan for the Colorado Convention Center, and now with the voters’ approval we should be able to put out an RFP for an architect by the end of the year,” he said. “We have established what we need, and now we will move ahead with the final design and construction.”

An independent study by the Strategic Advisory Group (SAG) released in 2014 recommended a variety of enhancements to the Colorado Convention Center, which were embraced by the City of Denver and presented to Denver voters.

The future expansions and upgrades to the Colorado Convention Center are below:

·           The development of new flexible meeting space of up to 85,000 sq. ft. and the addition of 120,000 sq. ft. of new pre-function and service space, including a 50,000 sq. ft. outdoor terrace, all to be located on the roof of the existing convention center. Both the pre-function and outdoor event spaces will have spectacular, unobstructed views of the Rocky Mountains and city skyline, allowing event attendees to take advantage of Denver’s 300 days of sunshine.

·           These new facilities will be seamlessly integrated into the building, and attendees will have easy access to the center’s existing exhibit, meeting room and ballroom levels.

·           Technology improvements will be made that will position the Colorado Convention Center as a “best-in-class” facility, keeping pace with current technologies and demand, including increased capacity for Wi-Fi and streaming video.

·           New and improved networking options will be incorporated into the building providing exciting and innovative spaces that capture the spirit of Denver and Colorado, and allow attendees to connect in new ways.

Denver then hired MIG, Charles Johnson Consulting, JLL and Fentress Architects, the original architects of the Center and expansion, to conduct the master plan for the Colorado Convention Center and produce preliminary renderings of the expansion’s major features.

The Colorado Convention Center celebrated its 25th anniversary in June 2015. It is credited with generating more than $500 million in annual economic impact for a total of more than $4.8 billion since the center was expanded in 2004. The center has also been the catalyst for many improvements downtown.  Denver will soon have 3,000 hotel rooms within one block of the convention center, and nearly 10,000 hotel rooms within easy walking distance by the end of 2016.

“We are very pleased with the preliminary designs as they really capture the Rocky Mountain spirit and take advantage of Denver’s fantastic views and year-round mild weather,” Rachel Benedick, vice president, Sales & Services said.  “With expansion on the reinforced roof area, we anticipate very little impact to conventions during this time.” She added there is no timeline yet for completion of the expansion.

“We’re very fortunate that in 1999, the architects and the City had the foresight to reinforce the roof during the expansion of the center to allow for vertical growth,” said John Adams with SMG, general manager of the Colorado Convention Center.

VISIT DENVER has launched an informational website at CCCExpansion.com to provide ongoing updates about the project.