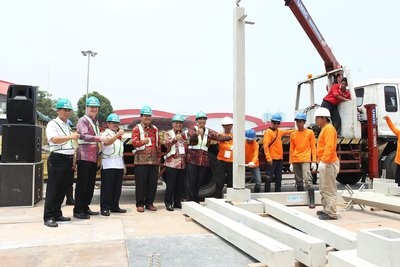 The trade show attracted a record number of exhibitors and visitors, with 200 exhibiting companies from 28 countries and 6,223 visitors.

Indonesia and other countries in the South East Asia region have huge demand for advanced concrete technologies and products in order to meet their ambitious infrastructure and development targets.

Speaking at the opening ceremony, Christopher Eve, president director of PT UBM Pameran Niaga Indonesia, the organizer of the event, said "Concrete Show South East Asia provides the perfect platform for Indonesian and international companies to showcase and demonstrate the very latest in products and services for the manufacture, application, testing and maintenance of concrete."

Indonesia's construction market is the biggest within ASEAN, accounting for 60-70 percent of the total market in the region.

"The rapid growth of the construction industry has turned the construction sector into the largest contributor to Indonesia's national income at about 10 percent," said Taufik Widjojono, secretary general of the Ministry Public Works and Housing at the opening of Concrete Show South East Asia.

One of the Indonesian government's flagship infrastructure policies is its target to build 1 million new houses per year. At Concrete Show South East Asia, a residential house was built within 24 hours in order to demonstrate the use of precast and prestressed concrete technologies. Widjojono said that such techniques enable a house to be built in a matter of days, instead of a month when using common techniques, and will help the government to achieve its target. "Concrete Show South East Asia 2015 serves an important role in supporting the improvement of Indonesian construction quality through interaction and knowledge exchange among both domestic and global players in the construction industries,” he added.

The Ministry Public Works and Housing took the opportunity of Concrete Show South East Asia to unveil its Catalogue for Concrete Products, an initiative aimed at establishing standards for the industry and accelerating the use of prestressed and precast concrete from its current level of around 16 ppercent to a target of 30 percent.

The next edition of Concrete Show South East Asia will be held Sept. 14-16 at the Jakarta International Expo, occupying a larger hall area to accommodate more exhibitors.