CONEXPO-CON/AGG & IFPE Make Giving Back Part of Their Culture 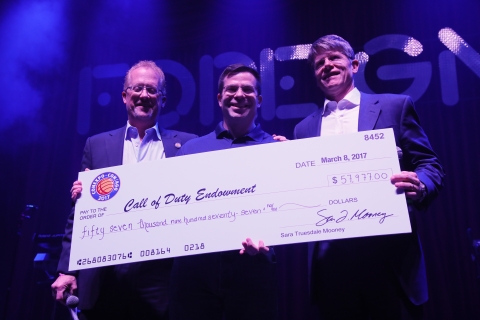 The trade show industry is no stranger to teaming up with charities and demonstrating its commitment to social responsibility, and one recent Las Vegas-based trade show went out of its way to exemplify that dedication to helping those in need.

As the world’s largest trade show and conference for the construction industry, CONEXPO-CON/AGG and IFPE showed its solidarity with U.S. military veterans by hosting several fundraising events during its most recent event, held March 7-11 at the Las Vegas Convention Center.

Hosted charity events included a benefit concert, as well as a live and an online auction dedicated to helping The Call of Duty Endowment, a non-profit organization that helps veterans secure high-quality jobs after their service.

With many veterans working in the construction and manufacturing industries, joining forces with the Endowment not only made sense for the show but also enabled its audience to help combat the high unemployment rate among post-9/11 veterans, reported to be 2.6 times greater than the national average.

“While our industry has given to numerous worthwhile causes over the years, in 2015 we collaborated with The Call of Duty Endowment for the International Construction and Utility Equipment Exposition Benefit Auction, raising more than $29,000 to help connect military veterans with quality jobs,” explained Sara Truesdale Mooney, CONEXPO show director and vice president of exhibitions and business development for the Association of Equipment Manufacturers, which owns and operates the show.

She continued, “Because many veterans work in the construction and manufacturing industries and the skill set they bring is a great fit for the many opportunities in our industry, CONEXPO-CON/AGG and IFPE teamed up again with the Endowment as the official charitable partner for the 2017 event.”

About 2,000 show participants harnessed their spending power for good by flocking to see legendary rock band Foreigner perform at the Brooklyn Bowl on the Las Vegas Strip, while many also participated in the live and silent auctions, helping to collectively raised more than $100,000 for the Endowment.

“These new benefit events offered the opportunity for CONEXPO-CON/AGG participants to not only network and have fun but also rally together as a construction industry community to raise funds to support military veterans,” Mooney said.

Many attendees expressed their enthusiasm for supporting a charity dedicated to transforming the lives of people who have sacrificed so much for their country, according to AEM officials.

The association already is considering another partnership with the Endowment, this time at the upcoming ICUEE Demo Expo, set for Oct 3-5 at the Kentucky Exposition Center.

“We’re so grateful for CONEXPO-CON/AGG and IFPE’s remarkable support of our veterans,” said Dan Goldenberg, executive director of The Call of Duty Endowment

He added, “Every dollar received by the Endowment will go directly towards the most effective and efficient veteran job counseling services in America. These will be dollars well-spent.”

Trade Show Companies Give Back to Their Communities
The trade show industry has a history of being generous to its surrounding communities, and a few companies recently have lent a helping hand to those in need. SmartSource…
BOSTON STRONG: Running to Give Back
By Douglas Emslie, Tarsus Group Managing Director I strongly believe that we as an industry need to do more to give back to our communities. To practice what I preach, this…
CONEXPO-CON/AGG and IFPE Break Records in Las Vegas with 2.8+ Mil Net Sq. Ft.
The overall largest trade show in the United States, the triennial CONEXPO-CON/AGG and IFPE, just grew even more when it was held last week in Las Vegas. The 2017 show…
Professional Convention Management Association Gives Back to Chicago Community
The Professional Convention Management Association not only brought thousands of convention managers to Chicago for a few days of networking and education last week during…
Music City Center and Caesars Entertainment Give Back
While the trade show and meetings industry continues its steady path toward recovery, some event-related organizations remain committed to making sure that those less…
Louisville Tourism, PMMI Foundation, Centerplate and IAEE Give Back This Fall
It goes without saying that the events industry could use more positive news right now. Here’s what several DMOs, venues and organizations are doing to help those who need it…