Convening Leaders 2018 Closes with Heartfelt Call to Change the World 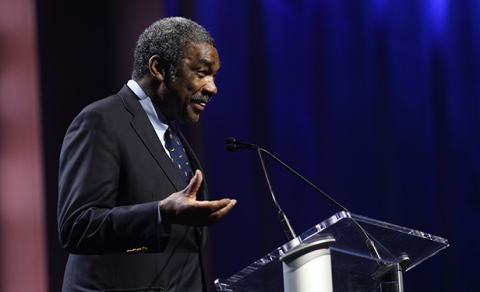 PCMA always has made a priority of providing top-notch education and thought-provoking keynote speakers for its annual Convening Leaders conference.

But this year, the annual event for convention management professionals outdid itself in choosing Bill Strickland, who closed out the event with his heartfelt speech, “Leadership, Self-Worth, and the Ability to Transform Lives.”

“All of our lives have purpose, and it’s up to each and every one of us to decide how we’re going to use it – to benefit ourselves or to reach out and help others,” said Craig Davis, president and CEO of Visit Pittsburgh, in introducing Strickland, who is the president and founder of the Manchester Bidwell Corporation, which offers after-school arts programs for underprivileged children and a career training center for low-income adults in Pittsburgh’s North Side.

“People are born as assets, not as liabilities,” Strickland asserted, in referring to societal attitudes toward poor people. “It’s all in the way that we treat people that drives their behavior.”

Strickland is one of those rare human beings who has made it his life’s mission to pursue one lofty ambition: to make the world a better place by helping to improve the lives of others.

Born and raised in a crime-ridden inner-city neighborhood, Strickland knows what it’s like to be given a second chance: his life was forever changed when he met Pittsburgh Public High School art teacher Frank Ross, who whose mentorship helped young Strickland understand the powers of art, education and community, and consequently helped him gain admission to the University of Pittsburgh.

While still in college in 1968, Strickland realized that his reason for being was to help others just like Ross had helped him, so he founded Manchester Craftsmen’s Guild to bring arts education and mentorship to inner city youth in his neighborhood. Now called the MCG Youth & Arts program, it uses the arts as an “intervention strategy” to help get kids off the streets through after-school programs in ceramics, design, digital arts and photography.

Designed to help get people out of poverty by turning them into productive citizens, the beautifully designed BTC is indeed awash with sunlight and filled with works of art, artisanal furniture and a flowing water fountain in the front courtyard.

“People are a function of (their) environment – beautiful environments create beautiful people, prisons create prisoners, so I decided to build a school of aspirations,” he said. “If you want to work with people who have no hope, you have to look like the solution, not the problem.”

His experiment appears to be working. Strickland boasted that in 24 years of operation, the facility hasn’t had to use an anti-theft system on the artwork; goes without a metal detector in the school and has had no problems with graffiti, drugs, alcohol or racial incidents, all in the highest crime-rate neighborhood in Pittsburgh.

“That’s not luck, that’s strategy,” Strickland said. “We discovered that if you treat people like human beings, they have a tendency to behave that way. If you treat them like convicts, they behave like convicts.”

He has since created a national model – the National Center for Art and Technology – that has been successfully implemented in nine U.S. cities and in Akko, Israel, with many more in the works.

“The only thing that we have determined is wrong with poor people is they don’t have money, which happens to be a curable condition,” Strickland said. “Kids need sunlight, good food, beautiful art and people who believe in hope and (with that) you can cure the cancer of the human spirit.”

Strickland’s message couldn’t be more timely for the events industry and the world.

The U.S. is a generous country. As of May 2015, there were approximately 1,521,052 charitable organizations in the U.S., with charitable giving accounting for 2.1 percent of gross domestic product in 2016, according to the Urban Institute and Giving USA, respectively.

In addition, corporate social responsibility continues to be a growing trend in the events industry, as trade shows and show organizers recognize the importance of not only giving back to the destinations that host their events but also the appeal of these programs to their audiences.

While some shows are catching on faster than others, organizers are becoming increasingly aware of the growing desire for attendees to engage in feel-good donation and/or volunteerism activities at their events, and that the demand isn’t showing signs of slowing down anytime soon.

Add in social media sites such as Facebook that have become incredible awareness platforms for charitable organizations around the planet, along with a Millennial generation that primarily wants to do business with brands and organizations that care about people and the earth, and more people are not only becoming exposed to all the need out there in the world but are also feeling more motivated to step in and do their part.

Strickland closed his speech with a challenge to the audience – to join his mission of making the world a better place by helping to end human suffering. Until then, he said he plans to tell his story as many times as it takes to get people to listen and help him create a world in which people everywhere don’t have to go to bed hungry ever again.

“What I really want to do is change the world, that’s what this speech is about,” Strickland said. “I think somewhere in your psychology, in your soul, hope exists. I believe it so much that I’m prepared to put my life on the line to play out this hand.”

Hear more about Strickland’s inspiring story and mission by watching his TEDx talk.

Want to help promote positive change by implementing CSR activities at your next event? Get started HERE.