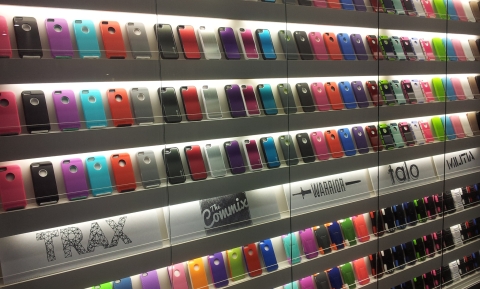 Wireless technology got plenty of celebrity action as Jennifer Lopez and Ashton Kutcher took center stage at CTIA 2013 Mobile Marketplace that took place May 21-23 at the Sands Convention Center.

The event drew about 35,000 attendees, many of whom were watching the keynotes on their mobile devices. Exhibitor count and square footage were on par with 2012, when about 1,000 exhibitors took up 297,903 net square feet.

As mobile technology has become ubiquitous in just about any industry, CTIA is gearing up to launch Super Mobility Week in September of 2014 that will bring together CTIA's two events – Mobile Marketplace and MobilCON – as well as UBM's 4G World, Tower & Small Cell Summit and IFA consumer electronics show in Berlin.

"Our industry has changed overnight, and so we had to reimagine the marketplace," said Robert Mesirow, vice president and show director for CTIA. "The industry and our members are very excited about the super show concept. It's a step in the right direction."

One of the defining factors is the partnership with IFA that will create a global platform for product launches particularly in the segments of connected home and smart technology. Keynotes will be broadcasted on both sides of the Atlantic. There also are plans for deploying robots to roam the floors in Berlin to offer physical presence to the global virtual audience.

Mesirow said he also is very excited about the thriving partnership with UBM's 4G World that will bring thought leadership and a significant showfloor presence to the event. He previously said, “As more international companies begin to deploy 4G networks, they look to the U.S. to learn from our experts and influencers throughout the mobile ecosystem.”

In addition, CTIA recently announced a partnership with National Association of Home Builders (NAHB) that is launching its own Design and Construction Week at the Las Vegas Convention Center Feb. 4–6, 2014. The associations have agreed to cross-market each other's event and share content. Mesirow noted that the move reflects the growing integration of wireless products into homes.

In the meantime, things were moving right along on the CTIA showfloor. Exhibitor Monty Barlow, with UK-based Cambridge Consultants, noted steady traffic and said that with 70 percent of the company's wireless business being in the US, the show is a great place to touch base with partners. But it also opens new opportunities, especially in the fast-growing medical tech field. "We met people here we wouldn’t have met in Spain or other shows around the world,” Barlow said.

Attendee Pratik Dhrona, with Canada-based Wirelessworks Solutions Ltd.. came to find testing solutions and found an impressive choice. He noted that as hardware prices continue to drop, features such as the amount of memory and camera specifications become more important to consumers.

"Brands are not as much of a factor as they used to be," Drohna said. "A lot of carries are looking to launch products from second and third-tier manufacturers as everyone is looking for ways to keep the costs down." He said he is excited about the new event next year and hopes that it will create an even more dynamic mobile marketplace.

Confidence Strong at EXHIBITOR 2013
Improving expectations of sales and the position of the United States at the top of global market drove increasing exhibitor and attendee confidence at 2013 EXHIBITOR Show,…
DEMA Show Posts Strong Numbers in Uncertain Economy
Mermaids, Hawaiian shirts and just about every type of equipment needed for a treasure hunt in a shipwreck took the spotlight at the 2012 DEMA Show, the world's largest…
Reed Exhibitions' NEPCON South China Posts Strong Numbers
The latest edition of Reed Exhibitions’ NEPCON China, a show for the electronics manufacturing trade, drew 26,374 attendees during the three-day event held recently…
Event Numbers up 13 Percent at Singapore Expo in 2013
Singapore Expo Convention and Exhibition Centre and its convention wing, MAX Atria, held more than 800 events in 2013 – an increase of 13% over 2012. Singex, the venue…
Advanstar's MAGIC Marketplace Shows Strong Growth
Fashion is back en vogue, or at least that was the vibe on the crowded showfloor of Advanstar Communications’ MAGIC Marketplace, the world’s largest trade show…
World of Concrete Shows Rock Solid Numbers
Hanley Wood Exhibitions' World of Concrete showed about a five percent increase in attendance and exhibit space, compared with last year, when it ran in Feb. 5–8 at…