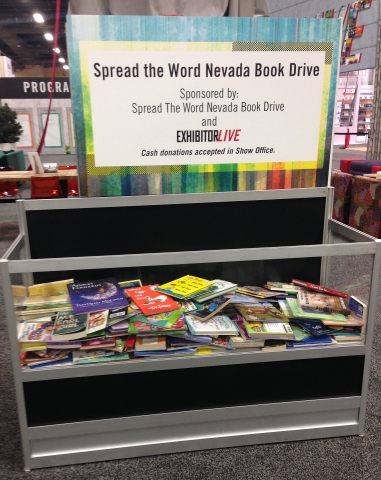 More and more trade shows are making corporate social responsibility in their host communities an annual tradition, and EXHIBITORLIVE is no exception.

For the third year in a row, the annual trade show and conference for trade show marketers held a book drive in partnership with Spread the Word Nevada, a Henderson, Nev.-based non-profit dedicated to advancing childhood literacy within low-income communities by providing books for at-risk elementary school students.

“Over the past three years our EXHIBITORLIVE attendees, exhibitors and staff have contributed hundreds of books and over $1,000 in cash contributions to Spread the Word Nevada,” said Randal Acker, president and COO of Exhibitor Media Group.

He continued, “We have a number of people on our team who were K-12 educators prior to taking their curriculum development skills to trade show and event marketing professionals, and as publishers and editors we know the power the written word can have for people. This is a great match for our two companies to work together to brings books into the lives of our younger generation.”

According to STWN officials, EXHIBITORLIVE attendees donated $330 and 165 books, which will be distributed to one of the organization’s 46 adopted Southern Nevada elementary schools during a monthly book distribution.

STWN gives out more than 49,000 books each month to these schools through its four literacy-focused programs – Kids to Kids, Breakfast with Books, Books & Buddies and Books on Break.

Since its founding in 2001, the organization has received more than 3.8 million books and has served more than 456,000 students.

“When the Exhibitor contacted us three years ago and offered to create a conference-wide book drive to benefit our children, we were thrilled,” said Lisa Habighorst, STWN co-founder and executive director.

She continued, “In 2016, more than 500 books and $500 were gifted to STWN because of the generosity of the conference attendees. That means that more than 1,000 children received a book from the conference, books that raised their confidence in reading and books that they can call their own. We are so pleased to be a partner with this incredible conference and look forward to continuing to make a difference in the lives of children, one book at a time.”

For Vegas-based shows and companies interested in integrating corporate social responsibility into their programming, STWN offers “Page it Forward” team building events that involve cleaning and preparing gently-used books from book drives and donations that are then distributed to thousands of at-risk children through the organization’s literacy programs.

EXHIBITORLIVE plans to continue this win-win partnership by holding another conference-wide book drive for STWN when it returns to the Mandalay Bay Convention Center Feb. 25-March 1, according to Acker.

“I am thrilled that EXHIBITORLIVE brought this important program back for a third year,” said Dee Silfies, chief learning strategist for Exhibitor Media Group.

She added, “We hope that all of us who are much more fortunate will ‘pay it forward’ and help put books in the hands of at-risk children, so they can keep, treasure and develop a life-long love of books.”

To learn more about Spread the Word Nevada, go here.

Don’t Give Up On CSR: Easy and Affordable Ways to Keep Programs Going Right Now
So your meeting or trade show has been postponed or cancelled. You turned your misfortune into good fortune for others by donating your unused food and event supplies to…
Education Sessions Delivered at EXHIBITORLive! 2016
EXHIBITORLive! 2016 at the Mandalay Bay Convention Center in Las Vegas was all about educating and empowering the trade show and events industry.  With more than 80…
A Six Point Checklist for Success at ExhibitorLive
Exhibiting at ExhibitorLive provides the opportunity to unleash your most creative skills to promote and exhibit your products and services to a receptive audience that is…
Cobo Center Releases 2017 CSR and Sustainability Report
Last year was a pivotal one for Detroit’s Cobo Center and its environmental initiatives, which have been highlighted in its recently released 2017 Social Responsibility and…
5 Myths About CSR, According to Tammi Runzler of CSRConnections
You know that incorporating corporate social responsibility activities during your events can be a win-win all around – for your attendees, charities in destinations that…
Creative Thinking and Digital Engagement Ruled the Day at EXHIBITORLive
From Warhol-themed terrariums to frequent flyer cocktails, the EXHIBITORLive 2018 conference and trade show inspired event and trade show marketing professionals to think…