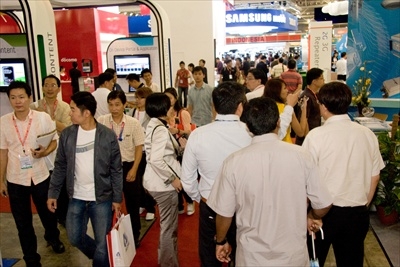 CommunicAsia2011, an exhibition for the global infocomm industry in the Asia-Pacific region, still is a few months away, but there are a lot of first-time exhibitors willing to place their bets on the event on tap June 21-24 at the Marina Bay Sands.


“CommunicAsia provides exhibitors a golden opportunity annually to display their innovative technologies and solutions, in addition to offering visitors from around the world a platform to keep track of the latest technologies and market development trends,” said Jason Wang, vice president of FiberHome international technology, which is making its debut at the show.


He added, “The debut of FiberHome at CommunicAsia2011 displays the company’s positive outlook and prospect towards the Asia-Pacific telecom market as well as its determination to expand business in the region.”


Devita Saraf, who is CEO of another new company exhibiting at CommunicaAsia2011 - Vu TelePresence – said, ““We have been successful at all major trade platforms worldwide for Vu Telepresence and look forward to having a successful launch of our product in Singapore.”


She added, “CommunicAsia has a long track record of success that speaks for itself and we are confident that our participation this year will be fruitful for us.”


“The strong interest shown by new exhibitors reflects the growing interest in CommunicAsia, which is becoming a bigger, better and more significant event for the ICT industry with each passing year,” said Victor Wong, project director of communications events for Singapore Exhibition Services, the show’s organizer.


He added, “The presence of larger numbers of industry stakeholders bodes well for potential business deals taking place during the course of the event in June.”


The exhibition also will feature new group pavilions from Korea, led by the Goyang Industry Promotion Agency (GIPA); from Sri Lanka, led by the Sri Lanka Export Development Board; and from Thailand, led by Telecommunications Research and Industrial Development Institute (TRIDI).


CommunicAsia2011 is being organized under the theme “Shaping Vision, Creating Reality”. Keeping with that theme, the show will feature breakthrough developments and the newest market-ready devices and solutions that will push the boundaries of satellite technology and communications to new levels, according to show organizers.