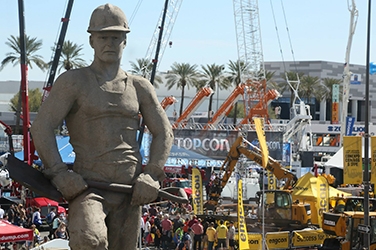 “GES delivered solid fourth quarter results to finish the year in line with our prior guidance,” said Steve Moster, Viad president and CEO, president of GES.

He added, “For the full year, positive show rotation, continued underlying business strength and the acquisition of leading audio-visual services provider ON Services helped to drive top-line growth of 8.0 percent and margin expansion of 200 basis points.”

As a result of several acquisitions in the past few years, including ON Services, Moster said GES now is able to cross sell multiple services, such as general service contracting, AV, event accommodations and registration.

The recent SIA Snow Show, he added, was a “great example of a full-service offering.” For the first time at the January show, it utilized GES as a GSC, as well for AV, event accommodations and registration.

Moster said a lot of GES’ clients wanted to have a single provider across multiple platforms.

“They also are looking for data and analytics,” he added. Having a single provider streamlines the data process, since all if it is collected and then funnelled in seamlessly.

Moster said the company is looking to expand even further, especially in the AV and event technology spaces.

“We are very interested in event technologies or AV technologies that really enhance the experience,” he added. “We are looking for things that draw people in and get them engaged with content.”

Moster said they were “thrilled” with the acquisition of On Services. “We are playing in a $2 billion market,” he added.

For 2017, On Services is forecasted to bring in between $76-79 million, meaning there is a lot of room for even more growth in the future, Moster said.

This year’s show schedule is starting off strong as well, with the No. 1 trade show on the TSNN Top 250 in years that it runs, CONEXPO-CON/AGG and IFPE, taking over the Las Vegas Convention Center in March.

In addition, the International Paris Air Show will hit the skies June 19-25 and SIBOS will be opening in Toronto Oct. 16-19.

“I am very proud of the team's accomplishments in 2016 and we enter 2017 with a healthy sales pipeline and favorable industry conditions, which position us for continued growth,” Moster said.

He added, “We’re firing on all cylinders, and we’re very excited about it. We’ve got more to come.”

Tarsus Group Closes Out 2018 with 9 Percent Uptick in Like-for-like Revenues
In a year without its two biggest biennial shows – Labelexpo Europe and the Dubai Airshow – U.K.-based Tarsus Group still snagged a 9-percent increase in like-for-like…
GES Closes Out 2017 Q4, Full Year with Revenue Jumps
With better than expected results, GES closed out not only the fourth quarter of 2017 with a revenue jump of 6.8 percent, but also an increase of its full-year results, with…
U.K.-based Tarsus Group Scores Like-for-like 8 Percent Revenue Uptick in 2016
In a year when two of its largest biennial shows – Labelexpo Europe and Dubai Airshow - did not run, U.K.-based Tarsus Group scored like-for-like revenue growth of 8 percent…
National Restaurant Show Sees Record 8-percent Uptick on Showfloor in Chicago
The 96th annual National Restaurant Association Restaurant, Hotel-Motel Show and the collocated BAR (Beverage Alcohol for Restaurants) at NRA Show, held at Chicago’s…
Viad’s 3Q Revenues Increase 36 Percent; GES’ U.S. Revenues Up 39 Percent
The third quarter was a good one in more ways than one for Phoenix-based Viad, as well as its divisions, including Global Experience Specialists in the U.S. and overseas.…
GES Scores Nearly 35 Percent Q1 Revenue Jump
First quarter revenues saw a significant jump for GES of nearly 35 percent to $318 million compared with $236 million during the same period in 2016. “GES’ growth during the…