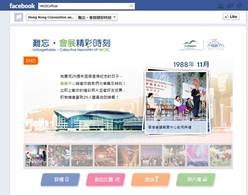 In addition, the company launched the “Unforgettable?Collective Memories at HKCEC”campaign using an app on the HKCEC official Facebook fan page to celebrate the venue’s 25th anniversary.

The upgraded app, which has a wayfinding function and a listing of the day’s events newly added, is available on iPhone App Store and Google Play for free.

This latest version of the HKCEC mobile app enables users to find their way, while inside the HKCEC by using the wayfinding function.

Visitors can make use of signs bearing QR codes at locations such as exhibition hall entrances, restaurants, lift lobbies to identify their current locations within the HKCEC.

After entering the starting point and destination, the app will show the suggested routing on an elevated floor plan.

Another enhanced feature of the app is “Today’s Events” included as part of the “Event Calendar”. This function is activated when visitors are within the HKCEC and using a GPS-enabled smartphone or tablet. Visitors also can find their way instantly by clicking the event venue shown on the list of “Today’s Events”.

The new features are in addition to “Where to Eat”, “Floor Plan”, “Transportation”, and “Announcements”, which provide information and latest updates about the HKCEC.

Another new social media initiative that HML has recently taken is an application on the HKCEC official Facebook fan page, inviting the public to celebrate the 25th anniversary of HKCEC.

The “Unforgettable?Collective Memories at HKCEC”app, launched July 15 to collect memorable photos and stories behind, has received a strong response, according to HML officials.

To date, more than 37 photos have been uploaded, and the number of ‘Likes’ to the HKCEC fan page has more than doubled.

“The upgraded version of the mobile app demonstrates HML’s commitment to continuously enhancing our customer services, and caters to the increasing popularity of smartphones in Hong Kong and worldwide,” said Monica Lee-Müller, managing director of HML.

She added, “At HML, we hope to celebrate the milestones of the HKCEC with the public and friends from around the world. Facebook is an effective channel.”