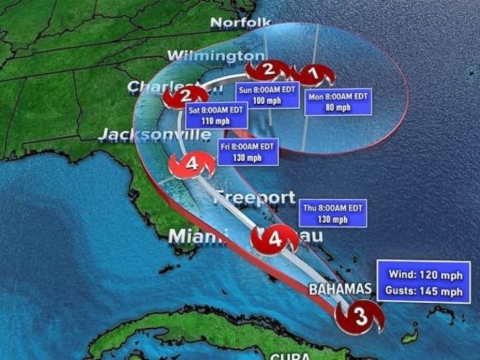 Hurricane Matthew already has wreaked devastation across the Caribbean, and now the most current forecast has its trek taking aim at not only the East Coast of Florida, but also up through Georgia and the Carolinas.

With several places declaring states of emergency and people beginning to evacuate, trade shows and events up and down the possible affected areas also have started to cancel.

Orlando’s Orange County Convention Center has a number of events scheduled in the next few days.

On the venue’s Web site, the following statement was issued this morning:

“At this time, the Orange County Office of Emergency Management is closely monitoring the track of Hurricane Matthew. Currently, the National Weather Service (NWS) has reported that this storm is a category 3 hurricane with forecasted impact on Central Florida, primarily the eastern coastline of our neighboring counties, on Thursday evening.”

Orange County may experience sustained winds between 39-45 miles, as well as heavy rains.

The ANCC National Magnet Conference currently is in the OCCC and scheduled to move out tomorrow afternoon, while some events, such as the Florida School Nutrition Association’s FSNA Equipment & Food Expo on tap Oct. 7-8, decided to cancel.

Even so, other events, such as Jeunesse Expo 2016, scheduled Oct. 6-9, still are going forward.

On Florida’s East Coast, TheFitExpo Ft. Lauderdale – which is part of a series of expos held across the United States – was canceled. It was scheduled to be held at Oct. 8-9 at the Greater Fort Lauderdale and Broward County Convention Center.

The show’s Web site had the following statement:

“Due to worsening conditions in Ft. Lauderdale and for the safety of all involved, the decision has been made to cancel TheFitExpo Ft. Lauderdale. We will provide more details in the coming hours, including any dates we may be able to reschedule the Expo for later this year. But for now, we just wanted to get this information out to everyone so you don’t board airplanes or get in cars heading to Ft. Lauderdale unnecessarily.

Thanks again for your patience and understanding during this difficult time.”

At the Savannah International Trade & Convention Center, the Southeastern Car Wash Association Tradeshow, on tap Oct. 8-10, currently is in a holding pattern.

On the SECA Web site, the organization’s president, Dale Reynolds, said they were monitoring the situation and would be letting people know if they decided to cancel the event.

“Our first concern is for the safety of everyone and do not wish to put anyone in harm’s way,” he added.

As of this afternoon, there was no decision on whether the show was going to be held or not.

SMG Jacksonville, which oversees several venues in the area, will be posting updates throughout the day to social media. They encourage people to follow @JaxEvents on social media for the most up-to-date announcements on this week's events at all of their venues.

More Conferences Canceled as Southeast Prepares for Hurricane Dorian
As Hurricane Dorian ambles its way toward the Southeastern United States, it’s wreaking more havoc on conferences and conventions. Show organizers are taking precautions to…
Shows Cancel in Wake of Hurricane Florence Impact on East Coast
Several shows have canceled at convention centers expected to be impacted by Hurricane Florence, which is projected to make landfall in the Carolinas as a Category 3 or 4…
5 Benefits to Taking Your Event Online
With constant enhancements in technology and the continuous fight to remain competitive, there has been a surge in ways to increase event revenue. With this surge  we…
XTI-360 Aims to Shield Events from Germs and Viruses
Imagine an event in which attendees are not skittish to touch a surface. While many never gave such a simple movement a second thought before, it will be a point of interest…
5 Things to Consider Before Taking Your Event Virtual
With trade shows and conferences of all sizes being canceled or postponed due to travel restrictions and COVID-19 health concerns, event planners are scrambling to take their…
Please Take TSNN’s Event Technology Trends Survey!
As part of TSNN’s Research Series, we currently are collecting survey responses from show organizers for the Event Technology Trends & Future Outlook study. The link…