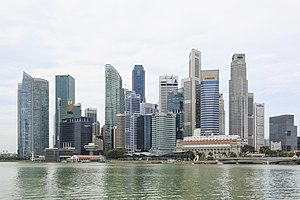 According to the International Congress and Convention Association (ICCA), there were a record number of 12,558 rotating international association events in 2017.

In terms of city rankings, Barcelona surpassed Paris and placed first worldwide in 2017, with 195 meetings. In Asia, Singapore remained 6th worldwide and ranked first in the region again, with 160 meetings.

ICCA: Singapore Top-ranked Asian City for Meetings
According to International Congress and Convention Association (ICCA), there were more than 12,000 regularly occurring association events in 2015, 571 more compared to 2014.…
Global Destination Sustainability Index Releases Its Second City Ranking
The Global Destination Sustainability Index has released its second sustainability performance ranking of 40 meeting and events cities throughout the globe. The GDS-Index is…
AIPC, ICCA and UFI Announce Global Alliance for Meetings Industry
The Global Association of the Exhibition Industry (UFI), The International Association of Convention Centres (AIPC), and The International Congress and Convention Association…
Suntec Singapore Scores the ‘World’s Leading Meetings & Conference Centre’ Award
Suntec Singapore Convention & Exhibition Centre (Suntec Singapore) was named the ‘World’s Leading Meetings & Conference Centre’ at the Grand Final of the 2014 World…
Rediscovering Atlantic City: Music, Meetings and Monopoly
Atlantic City has a long and rich history. The New Jersey city has been home to the Miss America pageant since 1921, and its 5-mile boardwalk, constructed in 1890, is the…
Martin Sirk, ICCA CEO Steps Down
The board of the International Congress and Convention Association (ICCA) announced this week that its long-serving CEO, Martin Sirk, will step down from his position at the…