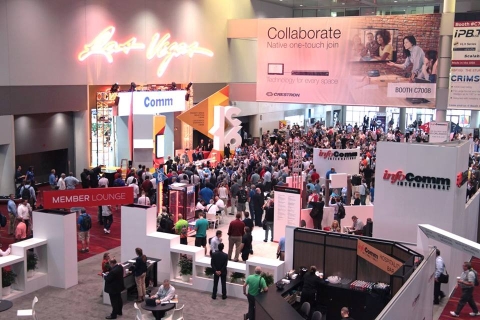 InfoComm International, for the commercial audiovisual and information communications industries, saw record growth in not only exhibitors, with 1,000 on the floor and 211 of them being first-timers, but also the showfloor expanded to 527,105 net square feet of exhibit and special events space — also a show record.

“The AV industry’s commitment to advancing technology and showcasing it at InfoComm has never been stronger,” said Jason McGraw, senior vice president of Expositions, InfoComm International.

He added, “The market is constantly changing and we’ve been pleased to introduce new features at InfoComm, such as drones, the Internet of Things, and content creation and streaming, which reflect the dynamic nature of commercial AV. In all, 91 percent of space was rebooked for next year, demonstrating exhibitors’ strong commitment to the show.”

Attendees registered for more than 12,000 seats at InfoComm University sessions throughout the week, which was more than double the number engaged in training and education in 2015.

InfoComm 2016 also welcomed 38,833-plus visitors, a 4.8-percent increase from the last time the show was held in Las Vegas, with more than 35 percent of attendees were visiting InfoComm for the first time.

As part of a special social media promotion, InfoComm encouraged everyone to take selfies and hashtag them #AVselfie – afterward they out together a VIDEO parodying three popular songs and incorporating all of the photos taken.

“This is a thriving, growing, busy industry — especially this time of year — and the fact that so many professionals continue to gather in one place, including new faces and dedicated InfoComm attendees, underscores the important role that the show plays in the success of their businesses and their careers,” said David Labuskes, executive director and CEO, InfoComm International.

In addition, a record 252 attendees registered to take a Certified Technology Specialist exam during InfoComm 2016 and 186 received their certification. Certified professionals earned more than 30,000 renewal units toward maintaining their CTS credentials through continuing education.

Many of InfoComm’s growing member councils also met at the show. Year-to-date, InfoComm International has welcomed more than 750 new members in North America — double the rate of a year ago.

Membership renewals in the first half of 2016 are up almost 40 percent compared to the same time in 2015. InfoComm membership in Europe has climbed 17 percent year-over-year, and overall membership outside the United States has grown 12 percent year-to-date. Up to 20 percent of InfoComm show attendees travel from outside North America to take part.

CES 2017 Showfloor Breaks Record in Las Vegas
CES, the world’s largest consumer technology trade show, had yet another record-breaking year. Held at the Las Vegas Convention Center and venues throughout the city Jan. 5-8…
HD Expo Scores Record Attendance, Exhibitors in Las Vegas
Hospitality design is booming, with the Emerald Expositions’ HD Expo, held May 13-15 at the Mandalay Bay Convention Center in Las Vegas, drawing a record crowd and exhibitors…
ISA International Sign Expo 2017 Breaks Participation Records in Las Vegas
The ISA International Sign Expo 2017 enjoyed a record-breaking show in Las Vegas. Held April 19-22 at the Mandalay Bay Convention Center, the annual trade show and conference…
InfoComm Sets New Records for Size and Attendance in Las Vegas
The Audiovisual and Integrated Experience Association lowered the curtain on its first InfoComm show in North America as AVIXA, while the annual trade show and conference for…
IMEX America Breaks Records Across the Board in Las Vegas
As the 5th IMEX America wrapped up in Las Vegas, records were broken across the board, with a total of 3,100 companies representing 150 countries exhibiting, including 80 new…
Vision Expo West 2018 Breaks Attendance Records in Las Vegas
Vision Expo West celebrated its 30thanniversary by achieving a nearly double-digit increase in attendance compared to the year before.  Held Sept. 26-29 at the Sands Expo in…