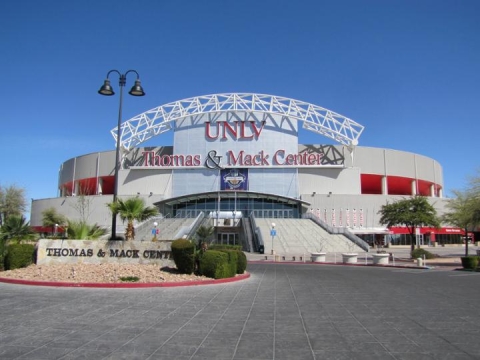 With Las Vegas being chosen as one of four cities to host a presidential debate during the 2016 election season, any question on whether it’s a city where serious business gets done should be off the table, according to Chris Meyer, vice president of Global Business Sales at the Las Vegas Convention & Visitors Authority.

“It takes away all possible argument of shows coming to Vegas,” Meyer said, an issue the city has grappled with, particularly in the government sector.

He added, “We’ll have both presidential candidates here and leadership from both of the parties.”

The Commission on Presidential Debates chose Las Vegas to host the Oct. 19 debate, just weeks away from Election Day, at the Thomas & Mack Center on the University of Nevada Las Vegas Campus.

“It’s the most widely watched (in the series) of debates,” Meyer said. In fact, he added, it’s seen worldwide, with people tuning in to see who might be the next president of the United States.

Along with the 800 delegates in the room, there will also be a massive press contingent covering the debate.

In 2012 in Denver, there were 3,500 media, but Meyer said this debate likely will attract more since there is not an incumbent running.

“We are excited that Las Vegas has been chosen to host a presidential debate and we look forward to showcasing our destination,” said Rossi Ralenkotter, president and CEO of the LVCVA.

He added, “Las Vegas is the No. 1 convention city in North America for 21 consecutive years because we know how to get business done, and we are confident that our experience and commitment to customer service will make this event a great success.”

The LVCVA partnered with UNLV to host a debate and the city was  chosen from 16 sites that were under consideration.

Las Vegas previously has hosted primary debates, presidential speeches, and been long considered for political conventions by both parties.

As an early caucus state, Nevada has played a key role in the election process already this year, and hosting a presidential debate will continue to increase the global visibility of both Las Vegas and the state.

Meyer said the investment was significant, $4 million, to being the debate to town, but the estimated economic impact just from the event is $6 million, “So, we’re already up,” he added.

The debate also can generate at least $50 million in publicity for UNLV and Las Vegas, according to data from 2012 presidential debate sites.

“We’re going to make sure to evangelize this, so it helps the industry in general,” Meyer said. “Las Vegas is a serious place to do business.”

Atlantic City Chosen as Host Location for 7th Annual 2016 TSNN Awards: Celebrating Trade Show Excellence
Trade Show News Network has named Atlantic City, N.J., as the host city for the 7th Annual 2016 TSNN Awards: Celebrating Trade Show Excellence. As the premiere awards program…
Las Vegas Among the First Major U.S. Cities to Reopen for Business
Las Vegas officially welcomed back guests in early June after more than two months of being shut down due to the COVID-19 pandemic. Taking care to comply with directives from…
Las Vegas CC Will Once Again Host Four Largest Citywide Shows in 2015
Four of Las Vegas’ largest trade shows, including No. 1 International CES®, No. 2 SEMA Show, No. 8 World of Concrete Exposition and No. 9 ASD LV will return to the Las Vegas…
Las Vegas Leaders Gather for Inaugural 2016 Global Meetings Industry Day
Las Vegas top meetings and convention experts came together April 14 to celebrate the first Global Meetings Industry Day (GMID) at the newly opened T-Mobile Arena. The event…
Las Vegas Shows Score Record Growth in First-half 2016
Las Vegas has a streak of good news with shows held in the first half of 2016 seeing major upticks in their numbers, with several reporting record growth. Through May 2016,…
MINExpo INTERNATIONAL 2016 Welcomes Attendees from 130 Countries to Las Vegas
By Elizabeth Johnson This week, the world’s largest mining equipment, products and services exhibition was held at the Las Vegas Convention Center. Sponsored by the National…