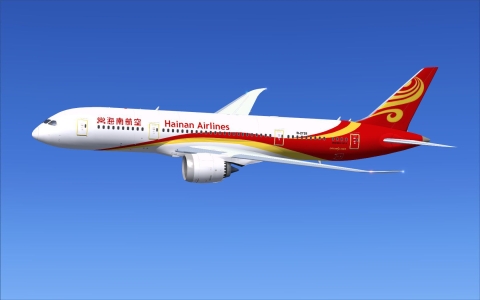 History was made today when Hainan Airlines’ first flight from Beijing to Las Vegas touched down at McCarrran International Airport filled with excited Chinese travelers, media and company officials. A traditional water arches salute greeted the aircraft as it taxied to the gate.

"We have just made history," said Hou Wei, senior vice president of Hainan Airlines, "flying the first commercial aircraft from Mainland China to Nevada, finally linking the capital of the People's Republic of China with the Entertainment Capital of the World, Las Vegas!"

With China considered to be one of the leading growth markets for visitation to Las Vegas, the accessibility of the new route introduces Las Vegas to millions of prospective visitors and will be instrumental to increase international visitation.

It has been a long-time goal of Las Vegas to have a direct route from the historic Chinese capital. Previously, travelers between the two points had to connect via a third U.S. or Asian city. The new route cuts hours off the previous travel time.

The service operates Mondays, Wednesdays and Fridays. Demand for the inaugural flight was so high that the airline switched to a larger aircraft, a Boeing 787-9, with an additional 76 seats, to accommodate everyone.

"Today's arrival is the culmination of many years of hard work, ushering in a new era of connectivity between Las Vegas and China," said Rosemary Vassiliadis, director of Aviation for Clark County, Nev.

She added, "McCarran has expanded its international capability specifically for moments such as today, and with the amenities of our new Terminal 3, as well as custom-created Chinese signage and Mandarin-speaking ambassadors, we're confident that Hainan’s passengers will enjoy an unparalleled airport experience beginning the moment they enter McCarran, and again before they return home." Chinese travelers are one of the fastest-growing and largest-spending groups of international visitors to Las Vegas. With the reciprocal 10-year tourist visas and the introduction of hotels, programming and amenities geared toward Chinese visitors, Las Vegas has established itself as a major draw for Chinese traveling to the United States.

"We are thrilled to welcome direct service between China and Las Vegas with the new route from Hainan Airlines," said Rossi Ralenkotter, president/CEO of the Las Vegas Convention and Visitors Authority (LVCVA.)

He added, "China is a very important market for Las Vegas. Expanding air service is a long-term process, and we share this successful achievement with the talented teams from Hainan, the LVCVA and with all of our resort and allied partners. Our partnership offers additional flexibility and convenience and increases opportunity for future growth."

· For economy class travel, fares to Beijing and beyond are available at affordable pricepoints

· For business class travel, round trip fares begin at $2588 (including taxes and fees) for outbound travel until Jan. 18, 2017. These fares include complimentary limo service in Las Vegas and Beijing.

Hainan flight 7970 departs McCarran International Airport at 1:10 p.m. and arrives at Beijing's Capital Airport at 6:10 p.m. the subsequent day, allowing for connections to other points in China.

The new route features Boeing 787-8 Dreamliners with 36 business class lie-flat seats and 177 economy class seats. Hainan is the airline with the most nonstop 787 Dreamliner routes between China and North America.

Hainan Airlines is Mainland China's largest independent airline, and is the only Mainland Chinese airline with a perfect five-star rating from Skytrax, the international airline ratings agency, six years in a row. Members of Alaska Airlines' Mileage Plan may earn or redeem points on Hainan Airlines flights.

Business class passengers enjoy priority check-in and can reserve complimentary private chauffeured car service between home, the airport and their destination in both the U.S. and China. Michelin-inspired gourmet Chinese and Western cuisine as well as award-winning wines, freshly brewed espresso and high-quality teas are available inflight. A state of the art entertainment system offers more than 100 movies, audio selections and games on demand.

Hainan Airlines Announces First-Ever Nonstop Service Between China and Las Vegas
Hainan Airlines recently filed an application with the U.S. Department of Transportation to launch an historic new route connecting Las Vegas to Beijing, the first-ever…
MINExpo INTERNATIONAL 2016 Welcomes Attendees from 130 Countries to Las Vegas
By Elizabeth Johnson This week, the world’s largest mining equipment, products and services exhibition was held at the Las Vegas Convention Center. Sponsored by the National…
Las Vegas Among the First Major U.S. Cities to Reopen for Business
Las Vegas officially welcomed back guests in early June after more than two months of being shut down due to the COVID-19 pandemic. Taking care to comply with directives from…
ABC Kids Expo Welcomed 12,000-plus Attendees to Las Vegas
ABC Kids Expo, organized by All Baby & Child Corporation, welcomed more than 12,000 attendees and 900-plus exhibitors to its 1 million square foot showfloor Oct. 18-21 at…
From Texas to Las Vegas, Esports Make a Splash In the Events Industry
As event destinations search for more recession-proof market segments to generate strong economic impact for their communities, the convention industry is taking a serious…
CSR Ideas to Borrow from Las Vegas Market, Orbus, FPSA and IAAPA
The summer months have been anything but slow and leisurely when it comes to CSR activities in the trade show industry. Here’s a roundup of event companies, associations and…