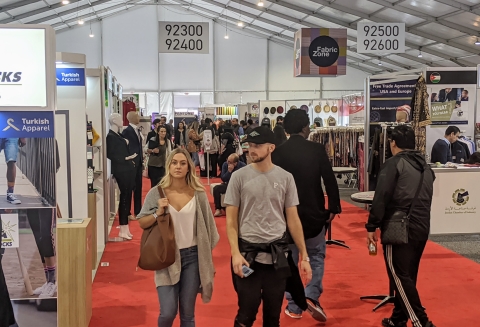 The biannual MAGIC fashion trade show that took place at the Mandalay Bay Convention Center Feb. 5-7 had more to deal with than fashion trends. It had to negotiate a move to a new facility and adjust to the rapidly changing global health situation all at once.

Usually occupying most of Las Vegas Convention Center, the event made plans to move to Mandalay Bay Convention Center for just one show. “We had to do it to get us back on the normal February and August schedule at the LVCC,” said Tom Nastos, chief commercial officer for the Fashion Group of Informa Exhibitions, which owns the show.

MBCC is a smaller facility than LVCC, so several outdoor pavilions had to be constructed to accommodate Sourcing at MAGIC and keep the original square footage. Showfloor plans had to be redrafted to spread the shows that comprise MAGIC across the two floors of MBCC and keep the curated feel of each show. Move-in times were shorter.

“We identified these challenges early on, and planning, experience and skill set made all the difference,” Nastos commented.

But the next set of challenges were impossible to plan for, with the coronavirus outbreak emerging from the epicenter of manufacturing in China and causing an international travel ban just days before the show was set to open.

Monitoring and mitigating this situation before the show was a 24/7 job, Nastos said. “The first question from everyone was, ‘Are you still having a show?’ We were watching what was happening in the U.S. and around the world. For us at Informa, health and safety are always top of mind. At the same time, so many brands and retailers depend on coming here and having a show, so we had to balance [everyone’s] best economic interest with everyone’s best health interest.”

The pivotal moment came when the White House made a proclamation on Jan. 31 barring entry for most foreign nationals who traveled to China within the 14 days immediately prior to arrival in the United States. “At that point, we said, ‘OK, it’s government policy. [How is it] going to impact us? We decided we were going to continue with the fair.”

Organizers believed that the impact of the coronavirus situation on the U.S. brands and attendees in the main MBCC would be relatively small. “We were constantly communicating what we were doing as event organizers. We were cleaning surfaces and advising people to wash their hands and stay home if they were not feeling well,” said Nastos.

Sourcing at MAGIC was a different story. Factories in regions other than China had zero dropoff, according to Nastos, but 45 percent of Chinese exhibitors couldn’t make it to the show. The few exhibitors who could come had to be redistributed among other companies on a redesigned showfloor.

Then there was also a question of public safety. “We contacted all the factories,” Nastos said. “It turned out that many of the Chinese organizers were already either in Germany or in the U.S. exhibiting at other fairs, so they’d been here for a while. We felt comfortable having them [at the show] since they were pre-cleared.”

The numbers for how many of the expected 80,000 attendees couldn’t come are not yet available.

As the show opened, it was evident that management had made the right decision. People were using the many hand-sanitizing stations. Talks in the Sourcing pavilion were busy, and business was conducted.

First-time attendee Christina Gaona didn’t have any reservations about coming to Sourcing. The co-founder of California-based product development company Fandomoid said, “I’m a little bit of a germaphobe anyway, so I wash my hands a lot. The show has been a good value for us as we look for new manufacturing partners.”

Sunny Li, an exhibitor with China-based manufacturer Amberstone Co Ltd., was pleased with the level of interest at Sourcing. “Our first day was very busy,” she said, “maybe because there [were] fewer Chinese factories here. We have quite a few leads.”

Upstairs at WWDMAGIC, exhibitor Nick Kim with fashion brand Miss Me was having a productive show. “We were definitely concerned about it [the virus situation],” he said, “but it doesn’t seem like it’s affecting the show as much as we expected.”

During the event, Informa announced it will partner with footwear fair MICAM Milano to introduce the North American edition of the global event, MICAM Americas, which will run alongside MAGIC in August.

Utility Expo and NGA Show Pull Off Successful In-Person Editions
While the Delta variant has certainly thrown a wrench in the industry’s recovery machine, major trade shows are continuing to happen in person—pandemic or no pandemic. Check…
How Visit Fort Worth Pulled Off a Successful Hybrid Event
As the event and tourism industry begins its slow journey toward post-pandemic normalcy, it has become clear that hybrid events – those with both socially distanced in-person…
Trade Shows Move Ahead While Addressing Coronavirus Concerns
While trade shows throughout the globe are continuing to cancel due to fears of COVID-19, some major events in the U.S. and Germany are forging ahead. They’re leveraging…
Virtual Successes: PRSA Travel & Tourism Conference Pulls Off a Valuable Learning Experience
With many events forced to go virtual within the past 18 months due to the global health crisis, there’s a good chance that this tumultuous time in the industry’s history…
IAEE Honors Industry Leaders Amid Challenging Year
As it closed out the industry’s most challenging year in recent memory, The International Association of Exhibitions and Events honored individuals whose innovative ideas and…
How to Pull Off a Winning Virtual Studio Presentation
Tracy Judge, founder and chief connector of Soundings Connect, is as poised a person as you’ll ever meet. A former corporate meeting planner at Maritz Global Events, Judge…