Plans are in the works to update, modernize and expand the America’s Center Convention Complex in St. Louis. Dubbed the “AC Next Gen Project,” the goal of the $175 million project is to secure the facility’s place as an economic and employment driver for the entire region.

According to St. Louis City and County officials, the need to expand the Complex has become critical as cities across the U.S. are making substantial investments in their convention centers as well as taking aggressive steps to lure lucrative meetings and conventions to their communities and regions.

“I’m excited to announce a joint commitment between St. Louis City and St. Louis County in America’s Center,” said City of St. Louis Mayor Lyda Krewson. “This investment has paid off for the St. Louis region in the past and it will continue to do so in the future.”

As an anchor to an entire subsector of the City’s downtown, America’s Center brings hundreds of thousands of people to the metropolitan area every year, hosting approximately 100 events annually with more than 600,000 attendees, 300,000 hotel room nights and generating $265 million of new direct economic spending for the community, according to Johnson Consulting.

In addition, the Complex supports more than 3,300 full-time jobs for residents across the St. Louis region.

At a press conference on Oct. 3 that was held to announce plans for the project, city officials expressed concern that because the facility’s amenities have not kept pace with competing convention centers in other cities, its prominence and value to the region are at risk.

In order to make the 41-year-old Complex more competitive in targeting the multimillion-dollar Midwest meetings market, the facility must undergo significant modernization, including expanded, contiguous and consistent quality exhibit space, improved loading dock access to the exhibit halls, the addition of a sizeable multi-purpose space, improved service access to exhibit halls and meetings areas, as well as other improvements. 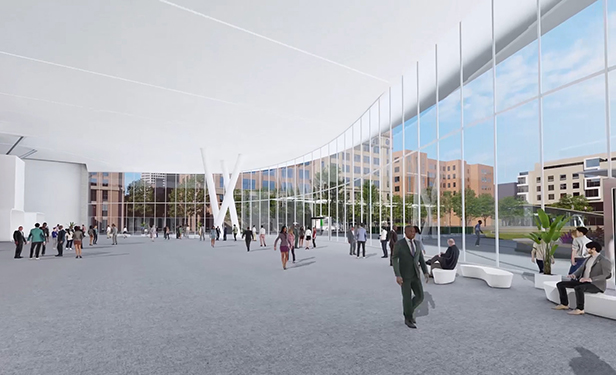 The total cost of the project is estimated to cost approximately $175 million and will include the following elements:

According to estimates by Johnson Consulting, the expansion and enhancements will stabilize the Complex’s current decline in event bookings and provide nearly 36 percent growth, as well as help St. Louis compete with other Midwestern cities that are currently investing in their convention centers, including Indianapolis, Nashville and Louisville, Ky.

The project will be funded by an extension of payments from the designated fund set up through hotel and motel taxes collected by St. Louis City and County, while city and county ordinances detailing the financing packages will be introduced soon, according to city officials.

“The America’s Center plays a critical role as an economic driver for the entire region (and) the Complex is truly a window for the hundreds of thousands of event attendees who visit us and are hopefully inspired to return here for future leisure or business event purposes,” said Kathleen ‘Kitty’ Ratcliffe, president of Explore St. Louis.

She continued, “On an annual basis, St. Louis hosts over 25 million visitors who spend more than $5.8 billion in our community. Expanding and upgrading the America’s Center will help us build on these visitor numbers and the 88,000 local jobs they help support throughout our region’s hospitality industry.”

Check out a video rendering of the AC Next Gen Project  HERE.