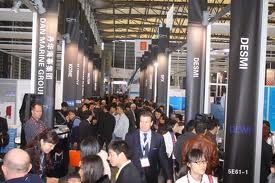 Marintec China 2013, organized by UBM Asia and the Shanghai Society of Naval Architects and Ocean Engineers, drew not only a record number of exhibitors, but also 13-percent more visitors when it recently ran in early December.

“Caterpillar has been exhibiting in Marintec China for over 20 years. Marintec is excellent and is the largest maritime exhibition in Asia,” said Kody Chan, regional sales director of Caterpillar Marine Asia Pacific.

He added, “This year, Marintec China has grown both in size and quality.  We met many existing and new customers, and we actually struck a few deals as well!”

Neil Gilliver, president, Merchant of Rolls-Royce said that it was his first time to attend Marintec, yet he already met with many existing clients, new and old friends.

He added, “It was a very successful show, and China is such an important market for Rolls-Royce Marine. Rolls-Royce will definitely to be exhibiting again for many years to come.”

With the theme of “Green Technology, Transformation, Breakthrough”, the Senior Maritime Forum ran in conjunction with the exhibition.

The Forum provided an in-depth discussion on the topics it had covered, which included Shipping and Ports, Shipbuilding, Ocean Engineering and Marine Finance.

The Forum attracted a lot of attendees who gained insightful information from renowned and high-level speakers from the Chinese government and Chinese companies, as well as from well-established overseas associations, companies and organizations.

Marintec China 2015 will be held Dec. 1-5 at the Shanghai New International Expo Centre.

HOTELEX Shanghai Attracts More Than 126,000 Visitors
The 25th Shanghai International Hospitality Equipment & Supply Expo (HOTELEX Shanghai 2016) ran from 29th March to 1st April at Shanghai New International Expo Centre (…
Eco Expo Asia Attracts Record Number of Visitors
The 13th edition of the show, held Oct. 25-28 in Hong Kong, welcomed a record 14,824 visitors from 106 countries and regions. With 54 percent of visitors coming from…
ProPak China 2015 Attracts Over 17,000 Visitors
Organised by China International Exhibitions, ProPak China (The International Processing and Packaging Exhibition) ran from 15th to 17th July. The exhibition attracted 733…
PACK PRINT INTERNATIONAL 2015 Attracts More Than 14,000 Visitors to Bangkok
The recent staging of PACK PRINT INTERNATIONAL 2015, 5th International Packaging and Printing Exhibition for Asia, attracted 300 exhibitors from 20 countries and 14,615…
5 Sure-Fire Techniques To Attract More Visitors To Your Exhibition Booth
The world of exhibitions is an exciting and stimulating one, but how do you stand out from the crowd? Making your exhibit as profitable as possible starts with the planning…
6 Ideas To Attract More Visitors To Your Trade Show Booth
Many of our exhibiting clients tell us they crave trade show ideas on how to attract more visitors to their booth. They want an attraction that makes their booth irresistible…