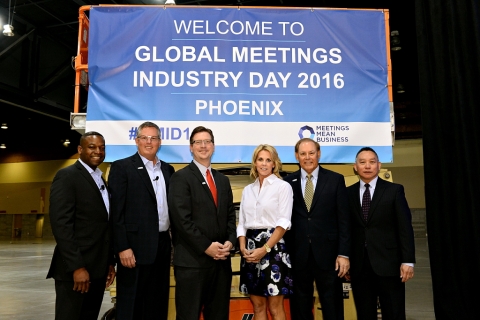 The Meetings Mean Business Coalition had a busy 2016 advocating to prove the value of the meetings industry, and 2017 looks to be even busier, as MMB continues to push existing initiatives forward and launch new ones.

He added, “In 2017, we are excited to build on this momentum and expand our reach through the newly launched Meeting Planner Taskforce aimed at engaging this important audience, a global licensing agreement that provides a framework for other countries to create their own MMB and the second annual Global Meetings Industry Day on April 6.”

Last year, MMB continued to advance their mission of bringing together the broader industry to promote the value of face-to-face meetings in fostering relationships, driving positive business outcomes and building strong communities.  Here are a few highlights in this 2016 “Year in Review” video.

The Worth Meeting About campaign in 2016 also highlighted the critical role that in-person meetings played during the election and connected the work we do to major current events.

Leveraging paid media, digital tactics and storytelling, the coalition targeted elected officials and policymakers with the message that when it’s important, it’s Worth Meeting About.

Videos to date include: Mike Gallagher, CEO at the Entertainment Software Association; Cynthia Fenneman, president and CEO at American Public Television; James Curleigh, president of Levi’s Brand®; and Brian Connolly, CEO of AdvoCare among others.

Small businesses are a critical contributor to the American economy and MMB wanted to look specifically at this important stakeholder group to explore how face-to-face meetings help them make the most out of their investments.

In 2017, MMB plans to expand the scope of Worth Meeting About to highlight current events and issues other than the election.

On April 6, MMB will hold its second annual Global Meetings Industry Day and will look to keep rallying industry advocates across the globe to champion the value of the meetings industry, in particular to elected officials.

To go global in another way - MMB has created a licensing agreement that allows international partners to build their own MMB coalitions in a way that is authentic to their country.

The licensing agreement will allow partners in countries and regions outside of the United States to use MMB branding, messaging and research to form one strong, cohesive voice for the industry.

He said, “We’re looking forward to working with our exhibitions partners as we spread the industry’s value story far and wide.