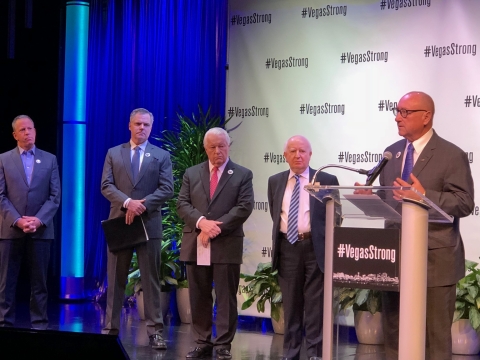 Leaders representing the meetings, travel and hospitality sectors gathered Oct. 10 during IMEX America at the Sands Expo & Convention Center to support #VegasStrong, the hashtag that represents the resiliency of Las Vegas after a mass shooting occurred at the Route 91 Harvest Festival 10 days earlier.

The Sands Showroom was packed for the press conference with individuals from the Las Vegas hospitality community, as well as media and executives from industry associations, including IAEE, SISO and ASAE.

A video played first with an Andre Agassi voiceover asking “What Is Strength” and then detailing all of the heroic actions during and after the shooting took place and ending with “Strength is our promise for tomorrow.”

Ray Bloom, chairman and founder of IMEX Group, took the stage and said, “When we first heard the news of what happened here in Vegas, we wanted to give our support.”

IMEX Group, a hosted buyer event for the meetings and events industry, decided to go ahead with its show that brings 12,000 attendees and a $23.7 million overall economic impact to Las Vegas. “It is very fitting we have the meetings industry here to show their support,” Bloom said.

Rossi Ralenkotter, president and CEO of the Las Vegas Convention & Visitors Authority, took the stage next and said that Las Vegas always has been a “compassionate community,” adding, “all of a sudden this happened. It was all attack on all of us. … The best of what we are (also) happened that night.”

He detailed how the LVCVA’s marketing agency R&R created the #VegasStrong hashtag to support the community and how the Las Vegas Convention Center still is being used as a support center for people impacted by the shooting. “This really is a caring community,” Ralenkotter said.

Roger Dow, president and CEO of U.S. Travel Association, spoke next, saying, “We’ve been so proud to see the way you all have handled this. One fear, one senseless act – Las Vegas has refused to let this define them.”

Jim Murren, chairman and CEO of MGM Resorts International, the parent company of Mandalay Bay where the gunman went on his rampage from, spoke next during the press conference.

He said he represented 50,000 men in women in Las Vegas who work for the MGM properties, as well as their families. “They have a job because of you, and without you they cannot take care of their families,” Murren said. “IMEX being here right now is almost poetic.”

He added that he has never been prouder of the MGM organization. “We are heartbroken, but we are not broken,” Murren said.

David Peckinpaugh took the stage next and said he was speaking on behalf of all the 43 million people who visit Las Vegas every year.

Scheduled Las Vegas-based Shows, IAEE Release Statements in Wake of Mass Shooting
In the wake of the mass shooting last night on the site of the Route 91 Harvest country music festival outside the Mandalay Bay Resort & Casino, several shows scheduled…
IMEX Group to Serve Up Plenty of Green Education at Upcoming IMEX America
Show organizers will have an opportunity to find even more answers to their questions about sustainability and corporate social responsibility (CSR) at this year’s IMEX…
Senate Approves Amendment Pledging Support to Hospitality Industry
A bipartisan proposal geared toward assisting the travel and tourism industries passed a crucial first step with the U.S. Senate’s approval late this week. The measure, put…
Travel Leaders and U.S. Department of Commerce Meet to Foster Industry’s Recovery
The U.S. Travel Association led a delegation of 11 travel industry leaders to Washington, D.C., March 8 for a roundtable discussion with U.S. Deputy Secretary of Commerce Don…
C2 International Cloud Lab to Debut at IMEX America
In two weeks, IMEX America attendees will push themselves beyond their limits thanks to a new feature, the C2 International Cloud Lab. C2 International, an annual business…
Exhibitions and Meetings Safety and Security Initiative Launches During IMEX America
In a room last week at IMEX America in Las Vegas, 135 people gathered to learn about the official launch of the Exhibitions and Meetings Safety and Security Initiative (EMSSI…