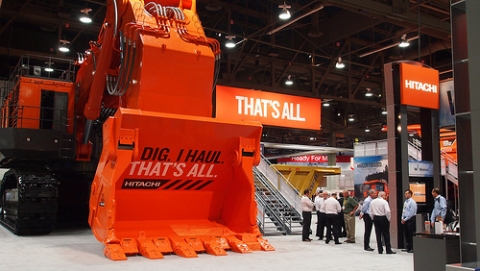 Just as the giant haul trucks and excavators the size of a three-story building, MINExpo International 2012 was impressive with its sheer size and was billed as a largest collection of mining equipment ever gathered.

Produced by the National Mining Association, the premier quadrennial event for the mining industry spanned 860,000 square feet, up 40 percent from its previous show in 2008.

The show featured a total of 1,890 exhibitors, also up nearly 45 percent, and attracted more than 58,359 attendees, an increase of more than 45 percent.

MINExpo was held at the Las Vegas Convention Center Sept. 24–26, and for the first time, took over the South Hall, where full registration and shuttle service were available.

"It was pretty astounding, particularly when you have uncertain economy," said Carol Raulston, senior vice president of communication for the National Mining Association.

She added, "One of the advantages of the show is that it is held every four years so the companies can build up innovation and time introduction of their new products and services."

Raulston noted that equipment producers currently are focusing on increased efficiency, better environmental performance and safety. "We're in the next generation of mining," she added.

Innovation was at the top of the list for attendee Jay Honse with Peabody Energy. "We are looking for new ideas, particularly in the safety category," he said. "The commodities aren't going well but we hope to see improvements. We are in the middle of expansion."

Uncertainty in the marketplace was a topic of many discussions as Caterpillar lowered its profit forecast for 2015, citing weaker demand for construction and mining equipment.

“There are a number of geopolitical and economic factors driving uncertainty in the world today, but our base case scenario calls for modest global economic growth over the next few years,” Chairman and CEO Doug Oberhelman said in the statement issued before the start of his presentation to analysts on Monday.

At the same time, Caterpillar had a record-setting exhibit spanning 52,000 square feet and offering attendees a rare chance to get a bird's eye view from the cabin of its giant haul trucks and other equipment, weighing a total of 2,600 tons.

The weight and size of the exhibited equipment are among the reasons behind choosing the Las Vegas Convention Center as the show’s venue.

Raulston noted that some pieces had arrived more than three months earlier and had to be assembled during the past week on site.