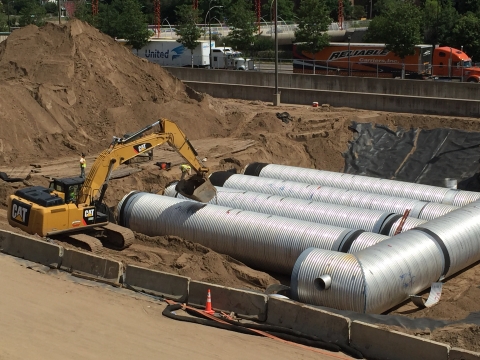 The Minneapolis Convention Center now is using a recently installed stormwater storage system that is expected to keep an estimated 5.4 million gallons of rainwater from running off and flowing into the Mississippi River each year.

A series of large rainwater storage pipes with a total storage capacity of 250,000 gallons have been buried under the facility’s marshaling yard, where they will collect runoff from 10 acres of the building’s roof and store it in a network of 10- and 11-foot diameter corrugated steel pipes until needed for irrigation.

As the primary source of water for the convention center’s irrigation system, the stored water will be used to irrigate the center’s landscaped areas.

In addition to reducing stormwater runoff to the river, the new system will also significantly lower the MCC’s water costs by reducing the amount of potable water the center has previously used to water its green spaces.

The massive project is also a recognition of the importance of the Mississippi River and the lakes to the region, according to Jeff Johnson, MCC executive director.

“In Minneapolis, we are proud that our city is the first major city below the headwaters of the Mississippi River,” Johnson said.

He continued, “Having one of the great rivers of the world in our midst, we have an obligation to keep it healthy for our own community and those down river. A healthy Mississippi River also provides recreation, tourism and an identity to our city. Installing the new stormwater system will divert 5 million gallons of stormwater from the river and our city’s lakes but also will help us to further our commitment to sustainability as a facility. From donating food to collecting organics and recycling waste to using solar power to offset our energy needs, we’ve been working for years to improve and update systems that make the Minneapolis Convention Center the best facility possible for our clients, our staff and our community.”

The $1 million project was funded out of the convention center’s annual repair and maintenance budget as part of the strategic plan to invest in the facility by making it more efficient through sustainable projects that reduce operating costs, according to Meet Minneapolis officials.

As Minneapolis has embraced the riverfront in recent years as a draw for recreation, visitors and new businesses, the City of Minneapolis and many partners have invested in efforts to reduce the amount of rainwater runoff from city properties, water that can carry pollutants into storm sewers, lakes and the river.

The completion of the stormwater project comes as the MCC works to attain LEED-Existing Buildings: Operation & Maintenance (EBOM) certification later this year, which includes a credit requirement for rainwater management.

As part of that ambitious goal, the facility has been working on upgrading the facility’s lighting to more energy-efficient products, including the recent addition of interior and exterior LED lighting in exhibit halls and future plans to change all lobby, meeting room and back-of-house space fixtures to LED.

In addition, a second phase of restroom remodels will continue the center’s efforts to reduce water usage by adding more water efficient fixtures.

The convention center was also recently recertified by the Green Meetings Industry Council for its sustainable operational practices.

Huntington Convention Center of Cleveland Diverts Massive Amounts of Waste in 2017
Last year was an especially green one for the Huntington Convention Center of Cleveland and the Global Center for Health Innovation, which knocked it out of the ballpark in…
Inside Operation Vanguard, Boston Convention Center’s Massive Security Drill
For any event organizer worth his or her salt, safety and security is always top of mind. In light of last week’s tragedy in New Zealand and today’s in the Netherlands, as…
Anaheim Convention Center Kicks Off 7th Expansion Project
The Anaheim Convention Center kicked off their seventh betterment expansion with a ground breaking ceremony last week. Tom Morton, executive director, Convention, Sports and…
Miami to Move Forward with Convention Center Headquarter Hotel Project
Last week, an overwhelming majority of voters from the City of Miami Beach approved the lease of public land for a privately-funded convention headquarter hotel that will be…
Destination Marketing Association International Annual Convention Draws 1,500 to Minneapolis
The Destination Marketing Association International Annual Convention saw their attendee numbers rise, with 1,500 taking part in its recent event held Aug. 1-3 in Minneapolis…
Minneapolis Convention Center Achieves LEED Green Building Certification
The Minneapolis Convention Center has been awarded Leadership in Energy and Environmental Design (LEED) certification for Existing Buildings: Operation & Maintenance (…