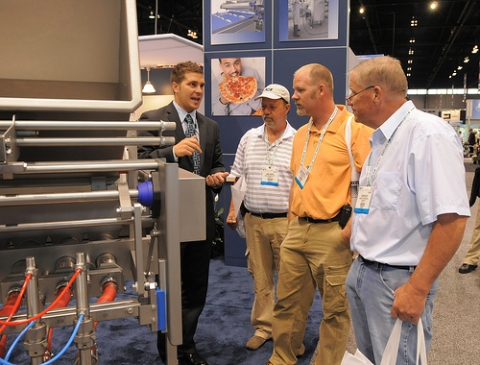 The Food Processing Suppliers Association’s 2011 Process Expo closed its show, which ran Nov. 1-4 at Chicago’s McCormick Place, with not only a 14-percent attendance uptick in international attendance, compared with the 2010 show, but also a record-breaker.

It wasn’t just international attendance that saw a spike though, the overall number of attendees and exhibit floor also grew, according to FPSA officials.

"We're very happy with the strong turnout at this year's show," said Scott Scriven, chairman of FPSA and president of Weber.

He added, "Not only did we double the size of the showfloor over last year's, we delivered more than twice as many attendees to the show at the same time. When you take the economy into account and what is going on at other industry trade shows, these results are absolutely remarkable and demonstrate the industry's enthusiastic support of a horizontal tradeshow dedicated entirely to the food and beverage industry."

The 2011 educational program featured three main areas of interest, including the Manufacturing Solutions: Practical Responses to Food Industry Challenges  , which included   sessions focus on key issues of concern in the food and beverage industry; the Seminario de Innovaciones, which was dedicated entirely to Process Expo’s attendees from Latin America; and the Siemens Exhibitor Spotlight Theater, which delivered a series of short technical workshops throughout the day on the show floor, covering a wide variety of topics of interest to food processors.

"This year, special attention was placed on the attendee experience at PROCESS EXPO," said FPSA President and CEO David Seckman.

He added, "This year's show featured a greatly expanded educational program built with input from the food processor community.  Culinary and industry council pavilions highlighted finished products for the consumer, and mobile resources such as the Process Expo mobile app and eDaily provided attendees with more information at their fingertips."

Last year, FPSA announced Process Expo would become a biennial event. The next show will be held Oct. 14-17, 2013, at McCormick Place.

International Vision Expo West Attendance on Par with 2011 Event
When Reed Exhibitions’ International Vision Expo West recently closed its doors at the Sands Expo & Convention Center in Las Vegas, the unaudited tally of eye care…
International Association of Exhibitions and Events' Expo! Expo! Sees 3-percent Attendance Uptick
This year’s International Association of Exhibitions and Events’ Expo! Expo! Annual Meeting & Exhibition in Houston reflected the overall continued optimism…
PGA Merchandise Show, NAMM Show Both See Upticks in Professional Attendance
Two wintertime shows heated up the trade show industry, with both the PGA Merchandise Show and the NAMM Show seeing an increase in professional attendance, compared with…
Canton Fair Closed With Record Foreign Attendance
The biannual China Import and Export Fair (Canton Fair), organized by the China Foreign Trade Centre and Ministry of Commerce (MOFCOM), concluded with a reported 207,000…
SISO Executive Conference Draws Attendance Uptick in Chicago
Someone might wonder what feathers, bricks, rhinoceroses and cows all have to do with the trade show industry, but attendees at the Aug. 13-15 Society of Independent Show…
Hanley Wood’s International Roofing Expo Sees 3 Percent Attendance Uptick
The International Roofing Expo recently saw a 3-percent increase in attendees to 8,382 when it ran Feb. 22-24 at the Orange County Convention Center in Orlando.   This…