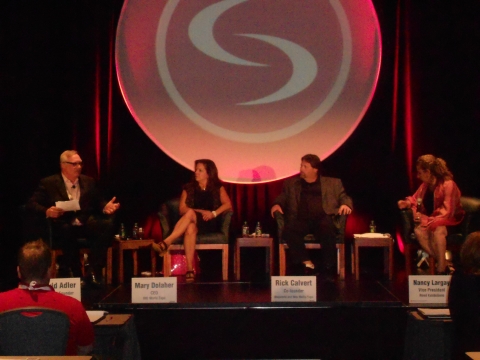 In all, 180 show organizers and suppliers came to the event held at Philadelphia’s newly expanded Pennsylvania Convention Center, compared with 150 attendees at last year’s conference in Boston.

The event kicked off Tuesday night with a reception at the Franklin Institute, and Jack Ferguson, president and CEO of the Philadelphia Convention & Visitors Bureau, welcomed the crowd.

“We’re delighted to have SISO back,” he said. “We hosted you six years ago. Philadelphia has changed a lot since then. There’s a 62-percent larger convention center.”

The next morning began with a keynote – “From Fractal marketing to FishTV” - given by Andrew Davis, chief strategy officer and co-founder of Tippingpoint Labs, who encouraged trade show companies to start thinking more about content 365 days a year and not “just go from planning one trade show to the next.”

Other conference sessions ranged from technology funding models, digital attendee development, how to monetize technology, managing the proliferation of technology and mobile marketing.

“The content for this event is really interesting,” said Lew Shomer, SISO’s executive director. “It is everything people are talking about, but I don’t think everyone understands. We need to take more time so that people can understand applications on how this all works.”

In “Monetizing Technology”, panelist Rick Calvert, co-founder of the BlogWorld New Media Expo, advised that people stay away from virtual trade shows, calling them a “waste of time.” Virtual conferences, however, he added were “very sustainable.”

The last panel of the event, though, was led by Kristin Beaulieu, senior vice president of sales East for UBM Studios, and she said virtual events, including conferences and trade shows, were a multibillion dollar business.

During the “Too much technology … too little time!” session, Mark J. Levitt, online product manager for O’Reilly Media, said that technology’s role is “to facilitate what people want to do any way.” Meaning, if the main objective of a trade show is to help people connect, than make sure the tools exist for that to happen.

The omnipresence of mobile phones, apps and other bells and whistles to use on the showfloor, such as using QR codes, also were hot topics during the conference, as well as how to use digital marketing to attract more attendees to the showfoor.

Rick McConnell, president of Hanley Wood Exhibitions and SISO Executive Conference Education Chair, said that technology was chosen as a focus for the event because he felt it was the most significant change impacting the trade show industry right now.

“The traditional ways to connect buyers and sellers are not enough,” he added. “If you are not tapping into the younger generation, you’ll see a decline in exhibitors and attendees. We also need to better understand the tools of social marketing. “

Jo Dickson, event technology director of Penton Media, said the conference was filled with a lot of information and provided a lot of actionable, specific ideas. “It’s good to hear what other show organizers are doing,” she added.

Shomer said he hoped people walked away from the event understanding that technology “is not a myth, it is here.”

He added, “It still needs to be harnessed. People need to be able to make money from it.”

Next year’s SISO Executive Conference will be held Aug. 13-15 in Chicago. Darrell Baker, director of Washington, D.C., regional sales for the Chicago Convention & Tourism Bureau, told attendees, “We have a lot of nice things planned. We look forward to seeing you in Chicago.”

2015 SISO Leadership Conference Will Focus on Millennials, Climbing CEO Ladder, Building Attendance
The 2015 Society of Independent Show Organizers’ Leadership Conference will not only take a look at what the Millennials really want, but also what it takes to be a CEO and…
Atlantic City Pulls Out All the Stops for 175 Attendees to SISO’s Executive Leadership Conference
Atlantic City rolled out the red carpet, and then some, for 175 attendees to the Society of Independent Show Organizers’ Executive Leadership Conference, held Aug. 11-13 at…
Las Vegas CVA 2016 Executive Summary Boasts Upticks in Visitation and Convention Attendance
Last year was a good one for Las Vegas, according to the Las Vegas Convention & Visitors Authority’s recently released 2016 Executive Summary. Driven by strong demand in…
2015 Greenbuild International Conference and Expo in D.C. Sees Big Attendance Uptick
The 2015 Greenbuild International Conference and Expo, owned and operated by Informa Exhibitions and presented by the U.S. Green Building Council and held Nov. 18-20 at…
EXPO MANUFACTURA Celebrates Steady Uptick in Attendance, Showfloor
Reflecting the dynamic growth of the manufacturing industry in Latin America, EXPO MANUFACTURA, the annual trade show and conference for the manufacturing and processing…
SuperZoo Caps Showfloor, Focuses on Growing Attendance
Determined to have a vibrant event, World Pet Association decided to cap the square footage for its 2014 SuperZoo, a trade show for independent pet store owners, that took…