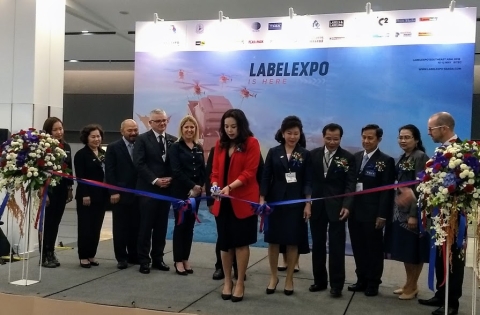 “An integral part of our strategy for organic growth is to invest in and expand our leading brands globally through our growing launch programme. We are delighted by the performance of the first edition of Labelexpo Southeast Asia, demonstrating the strength of the Labelexpo brand,” said Tarsus Group managing director Douglas Emslie.

He added, “We have traded well in the first half, forward bookings are well up and we remain confident of delivering a strong performance in 2018 in line with the Board’s expectations.”

This year has seen the launch of the next phase of the Quickening the Pace strategy - "QTP2: driving scale and momentum", a program that builds on the original QTP strategy.

The Group will deepen its presence in higher growth markets, look to maximise the scale of existing events and acquire new platforms for growth with the aim of continuing to drive strong shareholder returns.

Some first-half highlights include in China performance was strong and the Shenzhen events all performed well – in particular Hometex.

Labelexpo Southeast Asia, held in Bangkok in May was one of the group’s most successful launches ever, attracting nearly 8,000 attendees from 62 countries.

In the Americas, Connect held 13 events that were in live with expectations, the medical division also is performing in line and had a launch of the Cardiometabolic West event and the February Offprice edition also performed well.

In Mexico, trading was positive with another strong performance from Expo Manufactura.

Dubai’s first half was positive, and the only uncertainty still remains with some of the events in Turkey because of the political situation there and the around the further depreciation of the Turkish lira.

Launches will continue, particularly the replication of our events, which drives the growth of the Group's leading brands around the world and provides a lower risk, lower cost approach to driving organic growth.  Tarsus has invested consistently in this portfolio over the last four years, leveraging strong brands including Labelexpo, GESS and Connect.

There are 17 new events planned for 2018 of which 8 were held in the first half. 14 previous events are not being repeated. Including 6 biennial events running next in 2019, the launch portfolio stands at 49.

In the U.S., Connect acquired 80 percent of eTourism Summit, an event linking travel destination marketing executives with the latest products and services in digital marketing. The travel industry is one of the largest consumers of digital media.

In China, Tarsus has acquired a further 25 percent in SIUF, taking its overall stake to 75 percent, in line with the company’s strategy to acquire minorities where appropriate.

As for the outlook going forward, owing to the timing of the Group's events, revenues for the year as a whole are heavily weighted to the second half.

Bookings for the full year are strong and are 10 percent ahead of 2017 on a like-for-like basis.