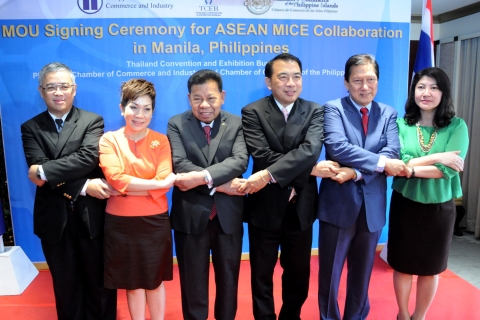 Speaking at the MOU Signing Ceremony on behalf of an official Thai counterpart,Nopparat Maythaveekulchai, TCEB’s President said, "... Thailand's MICE sector has been growing strongly in recent years. In 2012 we welcomed 895,224 MICE visitors,exceeding our annual target by 19 percent, with 7,382 MICE events and earnings of US$2.66 billion.MICE travelers from Asia have been largely responsible for this strong growth, representing 65 percent of all MICE travelers last year. The Philippines is one of Thailand’s priority countries.”

Thailand and the Philippines already enjoy a strong trade partnership. A2012 report from the Thai Ministry of Commerce (MOC) ranked the Philippines as the 12th export destination for Thai products, with total value amounting to US$ 4,861.17 million. The same report showed that the Philippines was Thailand’s 20th largest supplier of goods in 2012, with trade valued at US$2,724.21 million.

As an Asian economy on the rise, The Philippines will play an important role in contributing to the success of Thailand’s MICE industry.  Last year, The Philippines was ranked ninth in terms of numbers of MICE visitors to many business events in Thailand, accounting for 16,745 MICE visitors in total. In addition, TCEB expects the figure to grow by a further 10 percent in 2013, in line with the dynamism and rapid growth of the broader economy. The formation of the AEC in 2015 will add to these numbers when the 10 member states of ASEAN will become a single market with free flow of goods, services, skilled labor and investment.

Underlining the importance of building strategic partnerships, Nopparat added,“The two agreements that we are launching today will play a central role in driving this growth. This is the start of a long-term strategic partnership among our organizations that will be of immense benefit to our respective MICE industries and to the broader economic partnership between The Philippines and Thailand.”

This year Thailand has welcomed a number of MICE visitors from the Philippines in several exhibitions, such as VIV Asia, ISRMAX Asia, THAIFEX – World of Food Asia, Food Ingredient Asia and TFBO & TRAFS, and in meetings and incentives groups including Yokohama Tires Philippines.

“In line with the 10 percent growth target for the Philippines market, TCEB also expects Thailand’s overall MICE industry to continue to grow by 10 percent by revenue, with a year-end target for 2013 of 940,000 visitors and earnings of US$3.14 billion,” Nopparatsaid.

He added, “With the strong collaboration between TCEB, PCCI and CCPI, we are confident that we will be able to achieve our goal in the near future.”