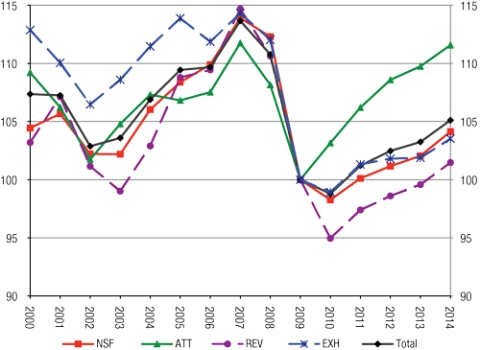 The Center for Exhibition Industry Research released its full-year 2014 Index Report indicating that the trade show industry grew by a modest 1.8 percent last year, which was slightly less than the 2 percent originally predicted.

"We are optimistic for the performance of the industry overall this year. Economic and job growth should continue to drive expansion in exhibitions," said CEIR Economist Allen Shaw, Ph.D., chief economist for Global Economic Consulting Associates.

The overall CEIR index is forecast to grow this year a full percentage point higher than the 2014 rate.

Over 2016 and 2017, CEIR expects the overall exhibition industry to continue to grow even more, although at a slower pace. The current projection shows growth at 2.4 percent in 2016 and 2.0 percent in 2017.

The overall performance of the CEIR Index represents the fastest sustained growth in the history of the research being compiled. By 2017, the total index of the overall exhibition industry is expected to reach about 1.0 percent below its previous peak in 2007.

According to CEIR's president and CEO Brian Casey, "the best performing sectors in 2014 were the Financial, Legal and Real Estate (FN) and Building, Construction, Home and Repair (HM) sectors, which respectively gained 5.2 percent and 5.1 percent.”

He added, “Alternately, the weakest exhibition sector was Education (ED), where the index declined by 3.0 percent.”

After its initial release, a forecast update of the CEIR Indexwill be presented at the CEIR Predict conference Sept. 16-17 in Chicago.

"This year's Predict will delve deeper than ever before into the relationship between the overall U.S. economy and how the exhibition industry plays into it," said 2015 CEIR Chairman Britton Jones, President & CEO of Business Journals, Inc. "Attendees will learn about innovative approaches to adapting their business models, marketing and strategic plans to maximize the forecast for the next three years."

Exhibition organizers who contributed data to the Index will receive the report with the Introduction and Methodology, the Macro Economy and Overall Exhibition Industry, and the sector report in which their event(s) fall.

Click here for information on how to purchase the complete CEIR Index Report. For more information about contributing to the Index or about the Predict conference, visit www.ceir.org/predict.