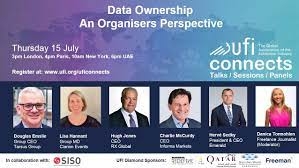 Prompted by a previous panel with four digital event platform CEOs held June 10 during UFI, The Global Association for the Exhibition Industry’s European Conference, in which eyebrows were raised when it was mentioned that digital event platforms owned customer data, UFI hosted a new panel to debate the issue last week with five top trade show organizing companies.

It should come as no surprise that the panelists fervently disagreed that any digital event company owned customer data and that, in fact, the customers themselves own their own data and permit companies to use it in a safe and controlled manner.

“Customers own their data [and] they give us consent to use their data,” McCurdy said. “That’s unequivocal. That’s the law and that’s the practice that’s appropriate behavior.”

Emslie said when he heard the comments from the June 10 panel he was “stopped in his tracks.”

“This is the Amazon moment going in the bookstore," he said. "This is Facebook coming after the media companies 10 years ago. We should be very, very, clear here, the barbarians are at the gate.”

Hannant pointed out that when a customer signs up for any event connected to a trade show, whether it be a digital event, webinar or a live event, they may be actually interacting with several third-party suppliers, but they believe the organizer is protecting the data at the end of the day.

She emphasized that organizers need to understand it is about "reputation and trust" when it comes to handling customer’s data.

Sedky said there was a “need to educate our industry and our customers.” He added that that UFI and the Society of Independent Show Organizers are doing a good job, especially because not every organizer has the ability to “dive into the detail that’s required.”

He also suggested that companies need to make sure they have internal expertise on data and privacy.

“It’s really important that we surround ourselves with people that understand this much better than we do,” he added.

Transparency is key on how the customer’s data is being utilized and protected, Emslie said, adding, “You can’t just write a blank check on data.”

Emslie also pointed out that investments by companies such as LinkedIn in digital platforms like Hopin should be seen as a direct threat to the exhibition industry, as well as venture capitalist investment in digital event platforms.

“VC is interested in the very short-term, (but) what really happens in the long term?” he asked.

Jones said that organizers are able to see the "world of wonder" that data represents, however, “we as an industry have not established a joint understanding of what to do with customer’s data, what’s appropriate and what are the standards for data ownership and security. We are still in testing mode.”

To further highlight this issue and raise more overall awareness in the exhibition industry around data ownership and protection, UFI and SISO will be sponsoring a whitepaper made available in the near future.

“We’re only one data breach away from disaster in our industry,” Emslie said.

The link to the full recording of ‘Data Ownership an Organisers Perspective’ from UFI Connects can be found HERE.

Trade Show Leader: The Expo Group’s Ray Pekowski
Ray Pekowski, CEO and chairman of family-owned The Expo Group, has been in the trade show industry for 41 years and said the key to success is creating strong relationships.…
Harnessing the Power of Event Data for Trade Show Growth
Nineteenth-century U.S. merchant and marketing pioneer John Wanamaker observed: “Half the money I spend on advertising is wasted. The trouble is, I don’t know which half.” …
Safeguarding Personal Data: Highlights for the Trade Show Industry
As most of you know, the safeguarding of personal data or as the GDPR calls it, personally identifiable information (PII), is a hot topic in the trade show industry. This…
Trade Show Leader: Amirexx’ Margaret Pederson
Margaret Pederson entered the exhibition world by happenstance, like many in the field.  She studied marketing (along with international business and law), but not…
Trade Show Leader: Freeman’s Bob Priest-Heck
Freeman President and COO Bob Priest-Heck was in the right place during the right time to ride the new wave in the digital technology community in publishing when he joined…
Trade Show Leader: mdg’s Vinnie Polito
Vinnie Polito has spent more than 25 years in senior leadership positions in the trade show industry, including nine with Reed Exhibitions. During his career,…