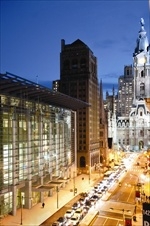 It was a tough battle when labor reforms recently were pushed through at Philadelphia's Pennsylvania Convention Center, but one that has evidently paid off, with two shows signing on to the center in 2017 and 2018.

The American Industrial Hygiene Association chose Philadelphia as the host city for its 2018 Conference and Exposition (AIHce), which is considered the most important event of the year among occupational and environmental health and safety professionals.

More than 6,000 attendees are expected to attend AIHce, using 13,608 total hotel room nights to generate more than $16.2 million in economic impact for the region, according to Philadelphia Convention & Visitors Bureau officials.

AIHce was last held in Philadelphia in 2007, and although attendance was strong, issues related to labor at the center were a concern and ultimately the reason AIHA chose not to return to Philadelphia sooner.

"Philadelphia has long been a ‘go-to’ city for so many reasons but bringing a large meeting to the Center was simply too difficult for was simply too difficult because of onerous work rules and limitations on exhibitors. This meant that, despite a successful meeting in 2007, AIHA would not reconsider Philadelphia," said Peter J. O'Neil, CAE, executive director of AIHA.

He added, "Fast forward to 2014, AIHA has signed to bring its annual meeting back - nearly 6,000 delegates in all - to one of the best cities on the East Coast. With better work rules expanded exhibitor rights, and a fantastic convention and visitors bureau team, we could not say no. We look forward to our meeting and to spending money in Philadelphia!"

The conference is the first to publicly announce a booking at the convention center since the new Customer Satisfaction Agreement, which modernizes the center’s work rules and expands customer rights, was signed by four labor unions and ratified by the center’s board of directors last month.

"We are thrilled that AIHce will be returning to the Pennsylvania Convention Center in 2018,” said PHLCVB President and CEO Jack Ferguson. “Their selection of Philadelphia is an early indication that customers recognize that the Convention Center and SMG heard them loud and clear, and that they see our commitment to putting them first.”

The National Black MBA Association (NBMBAA) also selected Philadelphia and the Pennsylvania Convention Center as the hosts for its 2017 Conference and Exposition.

One of the nation’s largest professional employment and development conferences, the event attracts executives, entrepreneurs, students and high-profile speakers.

According to the PHLCVB, the primary sales and marketing arm for the center, more than 8,000 attendees are expected to attend the NBMBAA Conference, using 10,541 total hotel room nights to generate more than $19.5 million in economic impact for the Philadelphia region.

"Philadelphia has been on our radar since we last held our conference there in 2003. The city’s prime location along the east coast, its growing minority business community and its wealth of attractions, among other things, creates an ideal backdrop to host some of our nation's top professionals” said Jesse Tyson, president and CEO, NBMBAA.

Tyson added, “With more customer-friendly work rules now in place at the Pennsylvania Convention Center, we are pleased to be bringing our Conference & Expo back to Philadelphia in 2017.”

Philadelphia initially was awarded the NBMBAA conference for 2014, but because of concerns about labor, a decision was made by the organization to delay bringing the meeting to the city.

"Bringing NBMBAA back to Philadelphia could only have been achieved with these customer-focused changes,” Ferguson said.

He added, “The PHLCVB, alongside SMG and the Convention Center continue to move forward diligently in pursuing any and all opportunities to fill our convention calendar for the coming years.”

The announcements by AIHA and NBMBAA came following an outreach event in Washington, D.C. hosted by the PHLCVB, SMG and the PCC to inform meeting planners about the changes at the center.

Additional events are scheduled to take place in major markets within the upcoming months and the joint marketing campaign, PHL: Here For The Making is being activated in key trade publications to detail these changes.