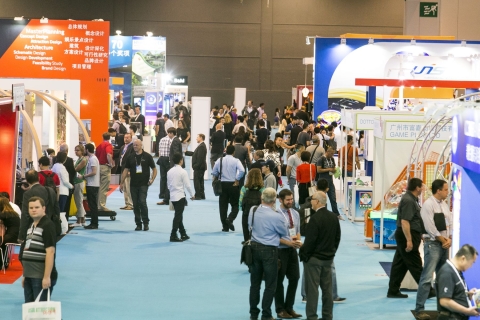 UFI recently released the 12th edition of its annual report on the Trade Fair Industry in Asia, tracking the growth of the exhibition industry in the region. Net space sold at Asian trade fairs jumped by 5.6 percent in 2015 to almost 19.7 million net square meters.

Of that total, 56 percent was sold in China – or in terms of net space sold 11.19 million sq. m. That is five and a half times the space sold in Asia’s second largest trade fair market, Japan (2.05 million sq. m.).

India was the fastest growing trade fair market in Asia in 2015 as space sold jumped by 7.8 percent. Southeast Asia continued post strong growth, as the Philippines, Indonesia and Vietnam all grew by - between 7.2 percent and 7.8 percent last year – well above the regional average of 5.6 percent.

space sold in Korea expanded by 3.7 percent and in Hong Kong by 3.2 percent. The market in Taiwan grew by 2.2 percent. Japan, the perennial weak performer in Asia, recorded growth of just 1.2 percent.

Asia’s venue capacity will exceed 7.8 million sq. m. by the end of 2016 and the number of venues operating in Asia this year will reach 207 – that is more than double the 100 venues that were in operation in 2004 when the first edition of this report was published.

In 2016, China will be home to 108 venues and more than 5.5 million sq. m. of gross indoor capacity. That represents more than 70 percent of total capacity available in the region.

Kai Hattendorf, UFI Managing Director, said, “With this annual report, UFI has been tracking the market developments in this region for more than a decade.  This research serves as a strategic resource for organisers, venues and a variety of exhibition industry stakeholders operating in Asia, as it provides sound and neutral data.”

UFI Asia/Pacific Regional Manager and BSG Managing Director, Mark Cochrane added, “The Asia trade fair industry sold more than 19.6 million m2 in 2015 – an increase of 5.6 percent, compared to the previous year. Asia’s remarkable track record of growth looks likely to continue throughout 2016– confirming Asia as one of the world’s most dynamic and fast growing exhibition markets.”

The report also includes analysis on actual market performance in 2015 as well as forecasts and commentary on key trends in each market.

The research was once again undertaken for UFI, The Global Association of the Exhibition Industry, by Business Strategies Group (BSG) in Hong Kong. As an added-value service, each UFI member will be entitled to receive an executive summary of the research and to purchase the full report at a discount.