There is more than one way to run a virtual event. Likewise, there are significant different objectives. Finding the right technological partner is crucial to securing the desired outcome. Here, we look at how two vastly different organizations — Connect and The Mars Society —have much to be proud of despite their paths.

Connect is a business-to-business operation geared to develop business relationships between meeting planners and hosts ranging from CVBs to hotels, convention centers and other venues. Unlike many companies, Connect kept its flagship conference in-person in 2020 with a hybrid component. Not wanting to lose momentum from that event in Orlando, the Atlanta-based organization developed a fully virtual event in March known as Connect Cyber.

Connect Vice President Patrick Higgins identified the conference’s objective as an effective method to maintain events business. In doing so, though, Connect maintained its commitment to face-to-face meetings while showcasing some of the many options planners now have at their fingertips. (Full disclosure: Connect and TSNN are both part of the Tarsus Group)

Rather than emanating from Connect’s headquarters or Higgins’ home in Tahoe, Nevada, the show was broadcast from the Salt Palace Convention Center’s new media center. Higgins co-hosted with Meetings Coordinator Hunter Raye.

“I was blown away,” Higgins said of the studio. “It’s such a creative and timely offering for meeting planners. The production crew and team at Visit Salt Lake was great to work with and helped us understand what our options were and how to make the most out of the technology.”

Connect’s 2018 signature event occurred in Salt Lake, making the partnership “a natural fit,” Higgins said. The decision to broadcast live in Utah was also a show of confidence that groups should consider traveling again, especially with the rapid increase in vaccine distribution.

The format resembled one of Connect’s regional or specialized events, bringing together 150 attendees (split about evenly between planners and suppliers) rather than aiming for thousands. Higgins said the team wanted to make it as easy as possible for attendees to do business, opting for Grip, which Connect has previously worked with. “Our approach to virtual events is simple:  create an easy-to-use platform for suppliers and planners to meaningfully interact with one another,” Higgins said.

While not everyone is ready to get on a plane, Connect’s hope is the event will whet attendees’ appetite for two upcoming shows, one in May in Las Vegas and another near Labor Day in Tampa.

“If anything, I think that we’re building anticipation for our in-person events,” said Higgins, noting feedback was universally positive. “Virtual meetings are great but everyone would agree with me when I say that there is absolutely no alternative to meeting in person, face-to-face.” 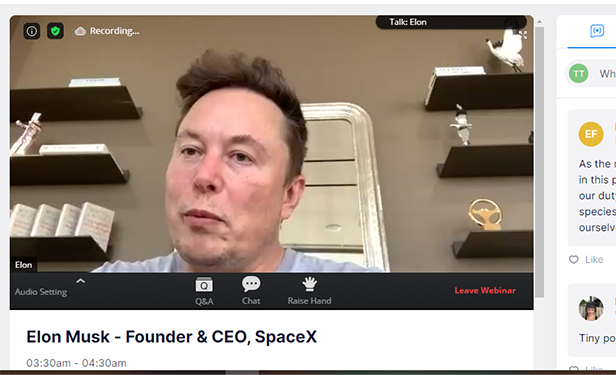 While Connect went intimate with its virtual event, The Mars Society — a nonprofit devoted to the exploration and settlement of the Red Planet — shot for the stars with its annual convention in October. “I decided to take a risk and see if our volunteers could put on a large event unlike anything we’d ever done,” said Dr. Robert Zubrin, founder and president of The Mars Society.

More than 150 speakers were tapped and nearly 130 education sessions were designed to attract a worldwide audience. More than 10,000 attendees tuned in — more than 25 times more attendees than years past — and viewership topped 1 million.

Star power in the form of keynote speakers Elon Musk and NASA Administrator Jim Bridenstine not only drove viewers, but also helped increase press coverage (CNBC, CNet and Space.com covered the conference) and bring in new members and substantial donations.

Going virtual facilitated logistics for landing big-name speakers like Musk, who notably took a question from a high school student. More than 100,000 people tuned in for that one session alone.

James Burk, director of information technology of The Mars Society, said he’s been championing the adoption of Zoom for years for the conference, which dates back to 1998. “I knew we had all the ingredients to pull off a large virtual event, like this one,” he said.

The final piece was Attendify, a platform the society’s leadership credits with easy user interface, an interactive online community and high-quality livestreaming. The organization plans to maintain its content on Attendify through its on-demand offerings.

The success sets the stage for a grander experience when the society comes together later this year. “We had 400 people at past [in-person] events, and what this experience has taught us is how powerful virtual event experiences can be,” Burk said. “Why would we want to go back to that? Next year, assuming a best-case scenario — wherein we’re all vaccinated and able to safely have conferences again, we’ll likely have a hybrid experience where people can attend both in-person and participate virtually from all over the world.”

Creating Successful Business Connections Virtually
Business as usual and 2020 are two terms that go together about as well as oil and water in today’s climate. To that end, the COVID-19 outbreak has forced associations to…
Connect Finds Success with Five-in-one Hosted Buyer Event
The most recent edition of the 2018 Connect meetings series, which collocated Connect Association, Connect Corporate, Connect Sports, Connect Expo and Connect Specialty and…
The Do’s and Don’ts of Hosting a Successful Virtual Event
As consumers and attendees increasingly rely on smartphones and digital tools, marketers look to bridge the online and physical worlds to maximize engagement and create…
Five Must-Haves for Virtual and Hybrid Event Success
Virtual and hybrid events have matured and evolved a great deal over the last couple of years, and they will keep connecting us long after the pandemic is over. Even as…
Tarsus Medical Successfully Concludes Two Virtual Summer Education Events
Tarsus Medical, a division of U.K.-based Tarsus Group, successfully concluded two virtual summer education events, focused on anti-aging and cardiometabolic health, that were…
How Human Behaviorism Plays a Role In Creating a Successful Virtual Event
The 2020 global pandemic has caused brands to rethink their approach to event marketing. Due to health guidelines, most in-person events have been canceled for the…